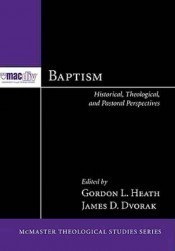 ALLEN BLACK
Baptism as a vital part of salvation has been — and remains — a distinguishing feature of Churches of Christ. Many church members might be surprised to know that some form of water baptism plays a significant role in virtually every religious group that claims Christ as its savior.
But, as the editors of “Baptism: Historical, Theological, and Pastoral Perspectives” observe, the “seemingly simple command of Jesus in Matthew 28 to make disciples and baptize them has been understood and practiced in a variety of ways.”
Gordon L. Heath, associate professor of Christian history at McMaster Divinity College in Toronto, and James D. Dvorak, associate professor of Greek and New Testament at Oklahoma Christian University in Oklahoma City, offer nine essays representing diverse views of baptism from across the wide spectrum of contemporary Christian traditions.
Heath and Dvorak bring together essays from Catholic, Orthodox and seven Protestant traditions — Lutheran, Reformed, Anglican, Baptist, Quaker, the Restoration Movement and Pentecostal. Each contributor is an academic but also writes as an insider concerning his own tradition, in which most have served in ministry positions.
In the book’s introduction, the editors say their goal is for readers not only to understand differences among believers on this crucial issue but also to “nudge us just a bit closer together as baptized followers of Jesus Christ.”
As the book’s subtitle suggests, the reader finds not only the theological perspectives on baptism within a particular tradition but also the history of the development of each tradition’s viewpoints. I say “perspectives” because most traditions contain several viewpoints, and some contain a wide variety of views. For example, in the chapter titled “Baptism among Pentecostals,” Steve Studebaker discusses significantly differing viewpoints among Classical Pentecostals, Charismatics and Oneness Pentecostals.
Anthony R. Cross’s essay on “Baptism among the Baptists” also seeks to present diverse points of view within a particular tradition. Cross is a British Baptist and is careful to indicate the history and current literature favoring some viewpoints that are congenial to a number of British Baptist scholars but are not what he presents as the predominant view. For example, he suggests that “for the majority of Baptists, baptism is an outward symbol of what is already taken place inwardly,” but he seems sympathetic to the view that “baptism is more than a symbol; it is an effective symbol.”
There also has been some disagreement about issues connected with baptism in the Stone-Campbell Movement. In his chapter titled “Baptism in the Restoration Movement,” Curt Niccum, Abilene Christian University associate professor of New Testament, points out that the Disciples of Christ and Churches of Christ differ concerning “how one should regard those who actually received adult immersion from other groups who lack the same exact understanding of baptism.”
Niccum also gives a fine overview of biblical-theological material on what baptism is, its origins, who should be baptized and, most importantly, the meaning of baptism, including its implications for Christians.
The one article representing a group that generally does not practice water baptism is Howard R. Macy’s “Baptism and Quakers.” According to Macy, “At their best, Friends (another term for Quakers) teach that they believe in and practice baptism as a spiritual reality, but that they do not use water or ritual to effect or symbolize that reality.” Yet, according to Macy, among Quakers there is a minority who believe that, although they are free from using the physical elements, they also are free to use them if they wish.
As the editors note in the book’s conclusion, baptism ends up serving as a catalyst for a range of other differences among religious traditions, including hermeneutics, church history and authority of Scripture.
Following the editors’ brief analysis, each contributor is given about two pages to respond to the other essays. One clear message that emerges from these responses is to underscore both the diversity and the irenic spirit represented by the essays.
This book is written at a collegiate level and would appeal best to college students, ministers or others with a serious interest in theological matters. Its purpose is to help readers understand the viewpoints of other traditions besides their own. It is an outstanding book for that purpose. It not only covers a wide range of viewpoints but also provides insiders’ views.
ALLEN BLACK teaches New Testament at Harding School of Theology in Memphis, Tenn., and works with adult ministries at Highland Church of Christ in Cordova, Tenn.