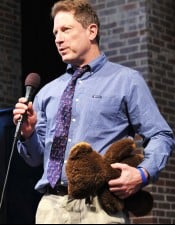 Passion for the Word

Bobby Ross Jr.
HOUSTON — Steve Hawley shares his Christian faith all over the world.
He has made nearly a dozen mission trips to Honduras. He has shown the love of Jesus in China and Haiti. He plans to travel to Vietnam this summer to work with missionary Tom Tune.
But when asked to name the most fertile mission field he has experienced, the Bible teacher at Westbury Christian School does not hesitate.
It’s right here in Room 258, the classroom where each weekday Hawley teaches two eighth-grade Bible classes, two sophomore Bible classes and one senior Bible class.
“We have daily contact with so many international students who are learning about Jesus for the first time,” said Hawley, a member of the Westbury Church of Christ, which offers services in English, Spanish and Chinese.
“Also, many of our American kids have been told about the Bible but have never really read it,” he added, “and I think that opens their eyes.”
Hawley’s passion for teaching the Bible — and his success in influencing young lives for Jesus — earned him the 2011 Teacher of the Year Award from the National Christian School Association. He accepted the honor at the NCSA’s recent annual conference in San Antonio.
“Steve Hawley has been an amazing presence on this campus and has earned a respect from the students and faculty that is second to none,” said Greg Glenn, Westbury’s head of school. “Along with being a fantastic classroom teacher, his influence continues way beyond those walls and into the hearts and minds of our students to make a transformational difference.”

Westbury, which is associated with Churches of Christ, is a 550-student Christian school perhaps best known for its athletic prowess.
Glenn, the school’s former basketball coach, led boys’ teams to 12 state titles in 14 seasons. The school’s football coach, Charlie Ward, is a former Heisman Trophy winner and National Basketball Association player.
Westbury is notable, too, for its diversity: Minority students comprise two-thirds of the total enrollment. African-Americans make up 38 percent of the student body, with whites at 33 percent, Asians at 13 percent, Hispanics at 11 percent and other students at 4 percent.
In addition, the school serves 44 foreign students, whose home countries include China, Vietnam, South Korea, Angola, Thailand, Taiwan and Nigeria.
Just 20 percent of students identify with Churches of Christ.
“In every way that you can measure diversity — whether it be socioeconomics, whether it be skin color, whether it be different cultures — you just name the way that you can break it down, and we’ve got a smorgasbord here that is very impressive,” Glenn said.
All of Westbury’s students attend daily Bible classes and participate in chapel services twice a week.
Many of those students make their way to Hawley’s Room 258, where posters based on Luke 18:1 urge young people to “pray and never give up” and a wall-length mural painted by advanced art students chronicles the life of Jesus.
“Steve is a humble person with a servant heart,” said Gracie Greer, Westbury’s assistant principal. “His Bible classes are his passion. Though he is certified to teach in other academic areas, he is not interested in teaching anything else — just the Bible.”
In Hawley’s classes, she said, “students must memorize Scripture, take quizzes on books of the Bible and apply what they learn in several ways — in service to others and in respect for each other. … Whenever a lady walks into his Bible class, the boys must stand.”
Gerran Harris, a football player who attends a Methodist church, is in Hawley’s senior Bible class. The class recently helped distribute bottles for students to save coins for two Honduran orphanages that Westbury students support.
Harris and other seniors spent a class period writing the words of Matthew 10:42 on small pieces of paper and stuffing them inside the bottles.
That verse reads: “And if anyone gives even a cup of cold water to one of these little ones who is my disciple, truly I tell you, that person will certainly not lose their reward.”
“I was spiritual before I came, but I just didn’t have too much knowledge about the Bible,” Harris said of his three years at Westbury. “I even went back telling all my friends about all this stuff I learned here.”
Now, the 6-foot-1, 240-pound athlete said, he finds the Bible so interesting that he keeps reading it, even beyond the assigned text.
Jenni Banh, the daughter of Vietnamese immigrants, is a Roman Catholic. Asked if she’s learned a lot about the Bible, the Westbury senior replied, “Oh yeah. A lot more than I used to know.”

Hawley, who has taught at Westbury for 13 years, grew up the son of a minister and Christian university professor.
His late parents, Roger and Nelda Hawley, met at Harding University in Searcy, Ark. His father taught at York College in Nebraska, Pepperdine University in Malibu, Calif., and Lubbock Christian University in Texas.
The Westbury teacher is the nephew of Monroe Hawley, a prominent Church of Christ minister in Wisconsin for more than 50 years.
Steve Hawley played basketball at York when it was a junior college and earned bachelor’s and master’s degrees at Harding. He received his teaching certificate in social science and did not plan to teach Bible.
A 32-year teaching veteran, he came to Westbury after working at Georgia Christian School in Valdosta and Friendship Christian School in Lebanon, Tenn. In Tennessee, he was asked to teach a Bible class — and found his calling.
“If any church in the United States was having 600 kids at their Vacation Bible School, that would be a major story,” he said. “But, you know, we have almost 600 kids every day that take the Bible academically, where they study and they’re graded on it, and their parents care. And to me, that’s just the best mission. I think I’ve got the best job in the world.”

LOVE OF THE LORD

Some of Westbury’s foreign students live in the home of assistant principal Greer and her husband, John, and worship with the Westbury church.
On a recent Sunday, Hawley baptized two of the girls — both from South Korea.
“Every girl we have had really loves Steve, as a teacher and individual,” said John Greer, a Westbury church elder. “They see his love for them — really, it is Christ’s love being reflected by Steve — and appreciate that concern for them.”
Emily Li, a Westbury graduate from China, e-mailed Hawley recently to thank him for his influence in her life.
“I want to let you know … that I am studying Bible and going to Church every Sunday,” Li wrote. “It came back. I put it aside for a while and not sure if this is what I want in my life. Now, I am sure because my heart feels it, this is where I belong. For me, this is a commitment of the rest of my life.”
Hawley — known as “Coach Hawley” because he coaches middle-school basketball players — said the Teacher of the Year Award overwhelmed him.
“The Lord prepared me to be a teacher by providing me with parents who taught, as do my brothers, Scott and Dave, and allowing me to learn from so many wonderful brothers and sisters at York and Harding,” he said.
Working at Westbury is a  blessing, he added.
As Hawley described it, “Our administration puts the souls of the children above anything else.”