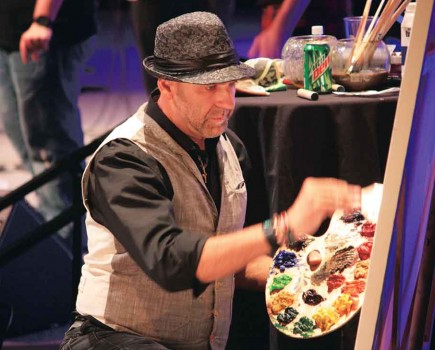 Ro Diaz, a Cuban-born Christian from Texas, created original works during Lipscomb University’s three-day Summer Celebration, which drew 4,000 attendees to the Nashville, Tenn., campus. The event coincided with Acafest 2012, the 30-year anniversary of the founding of Acappella by Keith Lancaster. Former and present members of the group performed at Lipscomb. Additional performances are scheduled for the Oklahoma Christian University lectureship in October.

Burton served as assistant director at the Children’s Home of Lubbock, Texas, before coming to Agape in 1982.

His wife, Chris, has served Agape staff for almost as long, working in the business office and overseeing technology needs since 1984.

“The number of people’s lives that have changed for the better thanks to Tom’s strategic leadership is unrivaled in this town,” Agape board chairman Tim Bewley said. “To him, we are eternally grateful.”

ABILENE, Texas — Allison Garrett, who was a finalist for the Oklahoma Christian University presidency earlier this year, has been named executive vice president of Abilene Christian.

“Allison comes to us with impressive academic and business experience,” Schubert said. “Most importantly, she is a strong Christian woman who is passionate about transforming the lives of students.”

Fellow Christians remember a woman of faith who was a member of the Goodlettsville Church of Christ and a longtime supporter of Goodpasture Christian School.

In the fall of 1969, Wells’ grandson, John Sturdivant Jr., began attending Goodpasture. In all, she had eight grandchildren, five great-grandchildren and 10 nieces and nephews attend the school.

In lieu of flowers, her family requested donations in the name of the Kitty Wells/Johnnie Wright Scholarship Fund.

CINCINNATI — After 146 years of weekly publication, Christian Standard magazine is moving to a monthly format.

Before the 1906 split between  a cappella and instrumental churches, the Christian Standard and the Gospel Advocate were the two major publications in the Restoration Movement.

In more recent times, the Standard has served the instrumental Christian Churches and Churches of Christ.

“We believe this new monthly format will do a better job of serving our subscribers and attracting news readers,” said Mark A. Taylor, publisher and editor.