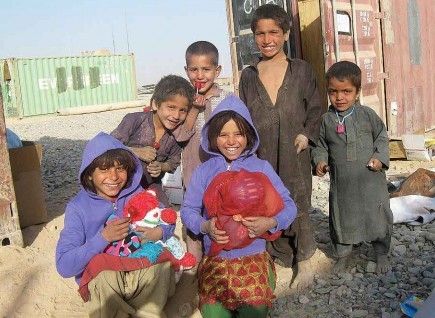 From Staff Reports
BIBLE CAMPS GANDER BROOK CHRISTIAN CAMP RAYMOND, Maine — Donations from Christian Chronicle readers and other supporters gave Gander Brook a financial boost that will allow the camp to survive the winter.
“This means that … we can concentrate on discussion and decisions which will improve the camping and spiritual enrichment experience of campers this summer without having to allocate funds back to old bills,” said Don Keiser, a Gander Brook board member and minister of the Southern Aroostook Chuch of Christ in northern Maine.
The camp needed more than $6,000 in donations and exceeded that amount.
CHILDREN AND FAMILIES   JEREMIAH’S HOPE KIEV, Ukraine — Social clubs at Abilene Christian University in Texas partnered with Jeremiah’s Hope to deliver gift bags to orphans and at-risk youths living just outside the Ukrainian Chernobyl zone.
The effort was the idea of ACU students Bonnie Kellum and Marcus Womble, who spent a summer in Ukraine working at Pine Branch Christian Camp, operated by Jeremiah’s Hope
Each gift bag was simple — a t-shirt, pens, crayons, toothpaste and socks, said Andrew Kelly, executive director of Jeremiah’s Hope. “But, for hundreds of impoverished children … it was a gesture of love and belonging that reached them (from) 6,000 miles away,” Kelly said.
HIGHER EDUCATION OKLAHOMA CHRISTIAN UNIVERSITY OKLAHOMA CITY — Oklahoma Christian celebrated the gift of biblical artifacts at a recent ceremony. The gift from 1967 graduate Monte Ginnings and his wife, Cheryl, represents 50 years of travel and study that began with Cheryl’s parents, Warder and Lottie Novak.
The collection includes artifacts from across Israel and the Middle East as well as pieces from the Louvre, the British Museum, the Egyptian Museum and the University Museum at the University of Pennsylvania.
The Ginnings catalogued the collection and gave it to Oklahoma Christian in hopes of giving students a more tangible sense of the Bible’s pieces and places. It’s on display in the library.
ROCHESTER COLLEGE ROCHESTER HILLS, Mich. — After a recent meeting with the Higher Learning Commission, Rochester College announced that it will remain a nonprofit, independent Christian college.
The college had negotiated with K12 Inc. about a possible venture in which the for-profit online education company would take over operations while allowing the Rochester campus to continue producing Christian servants and leaders, college President Rubel Shelly said.
Instead, the two entities are now exploring the possibility of a different kind of contractual relationship.
“Rochester College can establish a strong presence in the world of online education and distance learning with its courses and degree offerings; K12 can expand its educational services into the arena of higher education,” Shelly said.
He added, “We are already at work to craft the nature of the relationship in terms of academic control over courses and curriculum for RC and market analysis, advertising and the electronic format and delivery of courses through K12.”

YORK COLLEGE YORK, Neb. — York alumnus Caleb Hawley appeared on the recent season premiere of “American Idol” and received a golden ticket to Hollywood.
Hawley is the grandson of Monroe Hawley, a prominent Church of Christ preacher featured in a 2007 Dialogue interview in The Christian Chronicle.
K-12 CHRISTIAN SCHOOLS FORT WORTH CHRISTIAN SCHOOL NORTH RICHLAND HILLS, Texas — Texas Rangers slugger Josh Hamilton, the American League’s 2010 Most Valuable Player, and his wife, Katie, highlighted a recent fund-raising gala by Fort Worth Christian School.
The Hamiltons gave their testimony of how God has led them through struggles and triumphs in their personal lives, marriage and, of course, baseball.
“Baseball is third in my life, behind my relationship with God and my family,” Josh Hamilton told 1,100 supporters and friends of the school, which is associated with Churches of Christ.