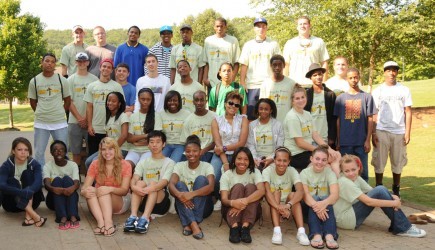 FROM STAFF REPORTS
CHILDREN AND FAMILIES FOSTER’S HOME FOR CHILDREN STEPHENVILLE, Texas — Sherwood and Myrtie Foster’s Home for Children recently celebrated its 50th anniversary.
Foster’s Home began in 1960 with one cottage and has grown to 12 homes housing more than 50 children.
More than 600 people attended the anniversary celebration, which included the dedication of two new homes.
“We appreciate those who have stood behind the home and its mission,” President Glenn Newberry said.
CHRISTIAN CAMPS GANDER BROOK CHRISTIAN CAMP RAYMOND, Maine — Gander Brook desperately needs donations to make it through the winter, said Don Keiser, a board member who edits the camp’s newsletter.
Higher-than-normal infrastructure repair costs and decreased donations have eliminated the camp’s small reserve, said Keiser, minister of the Southern Aroostook Church of Christ in northern Maine. “New England does not have any large congregations that are in a position to make major donations to the camp,” he said.
Donations can be sent to Gander Brook Christian Camp, P.O. Box 1423, Littleton, MA 01460. For more information, see www.ganderbrook.org.
CHRISTIAN MEDIA THE LIVING WORD BIRMINGHAM, Ala. — For 44 years, Jerry Jenkins served as minister of the Roebuck Parkway Church of Christ and speaker for “The Living Word” television broadcast.
The 74-year-old host of Alabama’s longest-running religious program died Oct. 26 after an extended hospitalization.
His legacy includes two preacher sons: Jeff Jenkins, minister of the Lewisville Church of Christ in Texas, and Dale Jenkins, minister of the Spring Meadows Church of Christ in Spring Hill, Tenn.
HIGHER EDUCATION ABILENE CHRISTIAN UNIVERSITY ABILENE, Texas — The ACU College of Business Administration recently named a new executive in residence: David Swearingen, former vice president of corporate communications for Johnson & Johnson.
Swearingen’s appointment “strengthens our educational offerings and enhances our ability to offer distinctive Christian leadership within our programs,” said Rick Lytle, the college’s dean.
Before moving to Abilene, Swearingen served as an elder of the Manhattan Church of Christ in New York.
FAULKNER UNIVERSITY MONTGOMERY, Ala. — Faulkner broke ground recently on the Allen Law Center.
The $2.5 million facility will add 17,000 square feet to the existing law school building.
The expansion will accommodate the law school’s elder law, family violence and mediation clinics, which provide low-income clients with student representation.
HARDING UNIVERSITY SEARCY, Ark. — On a steel beam that will soon be a part of the College of Business Administration facilities upgrade is a Bible verse written alongside hundreds of Harding University business students’ signatures.
The verse is Matthew 7:24: “Therefore everyone who hears these words of mine and puts them into practice is like a wise man who built his house on the rock.”
After a departmental chapel assembly, business students walked over to the construction site to sign the steel beams that will be used in the addition.
“The purpose behind letting the students sign the beam is to make them feel like a part of the construction and to help instill a pride in the program,” said Bryan Burkes, business dean.
OKLAHOMA CHRISTIAN UNIVERSITY OKLAHOMA CITY — Oklahoma Christian President Mike O’Neal has announced plans to step down in June 2012.
When hired in 2002, O’Neal said, he and his wife, Nancy, committed to 10 years in the president’s role.
“Though the future of OC holds many wonderful possibilities, with God’s blessings and your help, many of our original goals our nearing completion,” he said in a note to the Oklahoma Christian community.
“By virtually every measure, Oklahoma Christian has never been in better condition, and we feel it is time to begin an orderly transition to the next president who will lead the university to reach even greater levels of service and excellence.”
K-12 CHRISTIAN SCHOOLS JACKSON CHRISTIAN SCHOOL JACKSON, Tenn. — Jackson Christian’s recent second annual “Fill the Truck” campaign was deemed a huge success, organizers said.
Students brought items such as toilet paper, soap and deodorant for Tennessee Children’s Home in Spring Hill.
“I thought it was great,” said Larry Ivery, home director. “The hygiene products donated mean a great deal.”
The relationships developed with Jackson Christian students will benefit the home in the future, he said.