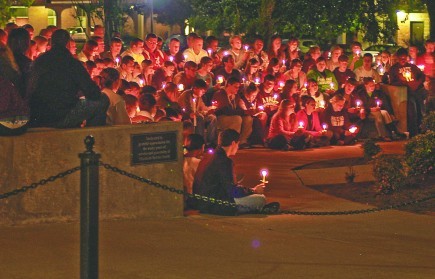 Staff Reports
CHILDREN AND FAMILIES
MOUNTAIN STATES CHILDREN’S HOME
LONGMONT, Colo. —  A donor has promised a matching gift of $100,000 if Mountain States Children’s Home can raise that much by the end of November.
The funds will help build a new cottage for children, director Randy Schow said.
“We are asking churches to consider having a ‘Giving Sunday’ to help us match the $100,000 needed,” Schow said.
To donate, see www.msch.org.
HIGHER EDUCATION

FREED-HARDEMAN UNIVERSITY
HENDERSON, Tenn. —  Freed-Hardeman President Joe Wiley opposes a liquor referendum that would permit package stores to sell alcohol in this west Tennessee community.
Wiley said he is personally opposed to alcohol consumption and will vote against the measure.
“I’m opposed to anything that would make it easier to obtain,” he told the Jackson Sun. The question is on the Nov. 6 ballot.

LUBBOCK CHRISTIAN UNIVERSITY
LUBBOCK, Texas —  Since moving to Illinois from Arizona last year, Jennifer Mault hasn’t found a church.
For now, she finds spiritual guidance from a woman a thousand miles away in south Louisiana, the Baton Rouge Advocate reported.
Mault, a student earning a master’s degree from Lubbock Christian, receives direction and prayer from online chaplain Donna Ellis. Ellis works from her kitchen in Baton Rouge.
“If I need prayer, or if I need to talk to someone spiritual about a spiritual issue or anything else, Donna’s always available,” Mault told the Advocate.
Donna Ellis and her husband, Kin, a minister for the South Baton Rouge Church of Christ have created a faith community on the Internet for dozens of LCU online students.

OKLAHOMA CHRISTIAN UNIVERSITY
OKLAHOMA CITY — Oklahoma Christian is building a new softball stadium.
Ricky and Kelly Lawson provided the seven-figure anchor gift for the project, for which fundraising remains ongoing.
The stadium will be named “Tom Heath Field at Lawson Plaza.”
Heath has served as Oklahoma Christian’s only softball coach since the program’s founding in 1995.
OHIO VALLEY UNIVERSITY
VIENNA, W.Va. — Flash mobs gather suddenly to sing or perform an impromptu dance routine.
Ohio Valley University students chose a different approach. Dub it a “flash serve.”
“The flash serve consists of students from Ohio Valley University coming into the community, trying to serve and give back,” Jeff Dimick, OVU’s executive vice president, told television station WTAP.
On a recent Saturday, more than 70 students served a women’s care center, an Alzheimer’s facility, an inner-city mission and other organizations.
K-12 CHRISTIAN SCHOOLS
JACKSON CHRISTIAN SCHOOL
JACKSON, Tenn. —  Jackson Christian School’s 885 students hope to make a difference through the “Power of One” initiative.
Periodically throughout the school year, students are learning about a different nonprofit agency and raising money to benefit it.
“This campaign is designed to teach our students that one child, one dollar, one hour can make an impact and change a life,” said Chris Ramey, the school’s director of advancement.
The students’ first project benefited Rein-Bow Riding Academy, which uses hippotherapy or horseback riding to serve children with special needs.