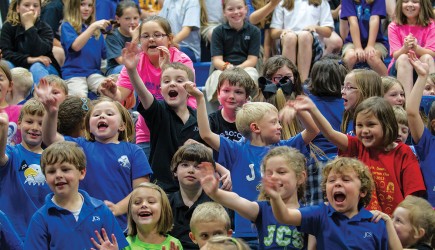 Staff Reports
CHILDREN’S HOMES
CITY OF CHILDREN
ENSENADA, Mexico — This church-supported ministry recently celebrated its 40th anniversary. City of Children houses about 100 children on 53 acres in Ensenada, about 70 miles south of San Diego.
Earl and Sue Farmer led the initial efforts to provide a better life for children in Mexico’s Baja California state. After 17 years, they passed the responsibilities to Stan and Carol Stout, who continued the work for 23 years.
Staff members past and present attended the celebration, during which the ministry’s Mexican directors, Ricardo and Patty Gonzales, were honored for 20 years of service.
HIGHER EDUCATION
FLORIDA COLLEGE
TEMPLE TERRACE, Fla. — Fifty-eight campers — friends and alumni of Florida College from nine states — contributed 1,200 man-hours to the Christian college during its summer Labor Camp. They pressure-washed, mulched, painted and renovated a riverside amphitheater.
Alumnus Craig Bean, a minister for the Spring Street Church of Christ in Racine, Wis., was inspired to start the camp in 2003 when he and his wife, Tami, dropped off their daughter for her first year at the college.
HARDING SCHOOL OF THEOLOGY
MEMPHIS, Tenn. — Jim Martin, pulpit minister for the Crestview Church of Christ in Waco, Texas, will become vice president of Harding School of Theology in Memphis, Tenn., in 2014.
Martin will succeed Evertt W. Huffard, who will remain as dean of the school, a branch campus of Harding University in Searcy, Ark.
Martin “brings a solid background in business, ministry and education, to his new job,” Harding University President Bruce McLarty said. “He has close ties with churches and preachers all across the country. I can’t imagine a better fit for this position.”
IBARAKI CHRISTIAN UNIVERSITY
HITACHI CITY, Japan — Student at Ibaraki Christian remembered the triple tragedy that devastated their country in 2011 by collecting funds for victims of the recent Oklahoma tornadoes.
Students and families affected by the 2011 earthquake, tsunami and nuclear emergency in Japan received assistance from the “Living Together” fund — part of which came from Oklahomans, said Jim Batten, the school’s chancellor.
Students and board members at the university — plus students and staff at Ibaraki Christian High School and Junior High and the staff of the Hitachi and Omika kindergartens — contributed thousands of yen, totaling $4,174.85, which the university sent to the Memorial Road Church of Christ in Oklahoma City for tornado relief.
“Less than 10 percent of our faculty, staff and students are ‘Christian,’ according to their religious preferences,” Batten said. “But the love for their fellow man is clearly evident.”
BULLETIN DIGEST
McCRORY, Ark. — Bringing Bulletin Digest into the digital age is the goal of new owners Matt and Darcy Clifton.
Since 1982, the publication has provided Churches of Christ with Bible-based articles, graphics and filler material for church bulletins. The new owners plan to launch digital versions of the publication, including a PDF format, to make it easier to cut and paste articles into bulletins. The Digest will continue to produce a print version.
The Cliftons, members of the McCrory Church of Christ, purchased the publication from Charles and Jane Beebe of Abilene, Texas.
“We are so blessed to know them,” Matt Clifton said, “and humbled to be able to carry this important work forward for the church.”