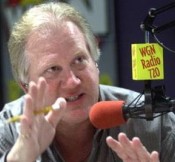 O’Dell lets faith shine, on and off air

Bobby Ross Jr.
CHICAGO — As a boy, Spike O’Dell never caused too much trouble in worship.
But occasionally, his mother, Dotty, now 81 and the secretary at the Moline, Ill., church, felt the need to thump him.
“Now, I make a pretty good living doing what she thumped me on the ear for — talking too much,” jokes O’Dell, 53, laughing as he leans back in his swivel chair at news/talk station WGN-AM 720, where he is the top-rated radio personality in Chicago.

LISTEN TO SPIKE O’DELL and read more about his early years at http://wgnradio.com/spike/index.htm.
August 1, 2006