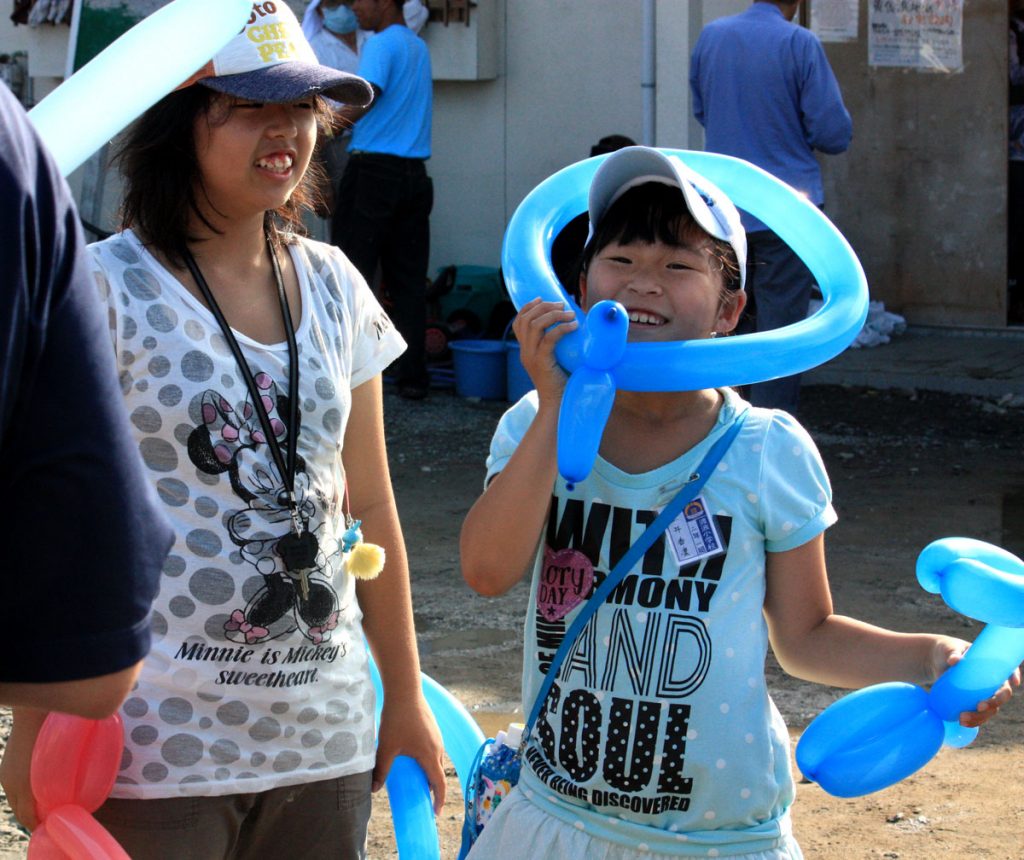 No God in Japan? Acts of Christian compassion after quake and tsunami say otherwise


“We do not have God in Japan.”
I’ve been pondering that phrase a lot in recent months. It’s from a conversation my mom had with a Japanese woman when I was a kid back in Macon, Ga. My hometown had a factory operated by YKK USA, a Japanese-owned company that manufactures zippers and various plastic parts. (If you’re wearing pants, check your zipper — discretely. Chances are there’s a small “YKK” emblazoned on it.)
YKK sent some of its executives and their families to Macon to manage the factory. Their kids sat next to us in elementary school. My sister became close friends with a Japanese girl, and her mother brought us a plate of mysterious diced fish wrapped in rice and seaweed. (I had never heard the word “sushi” before.) 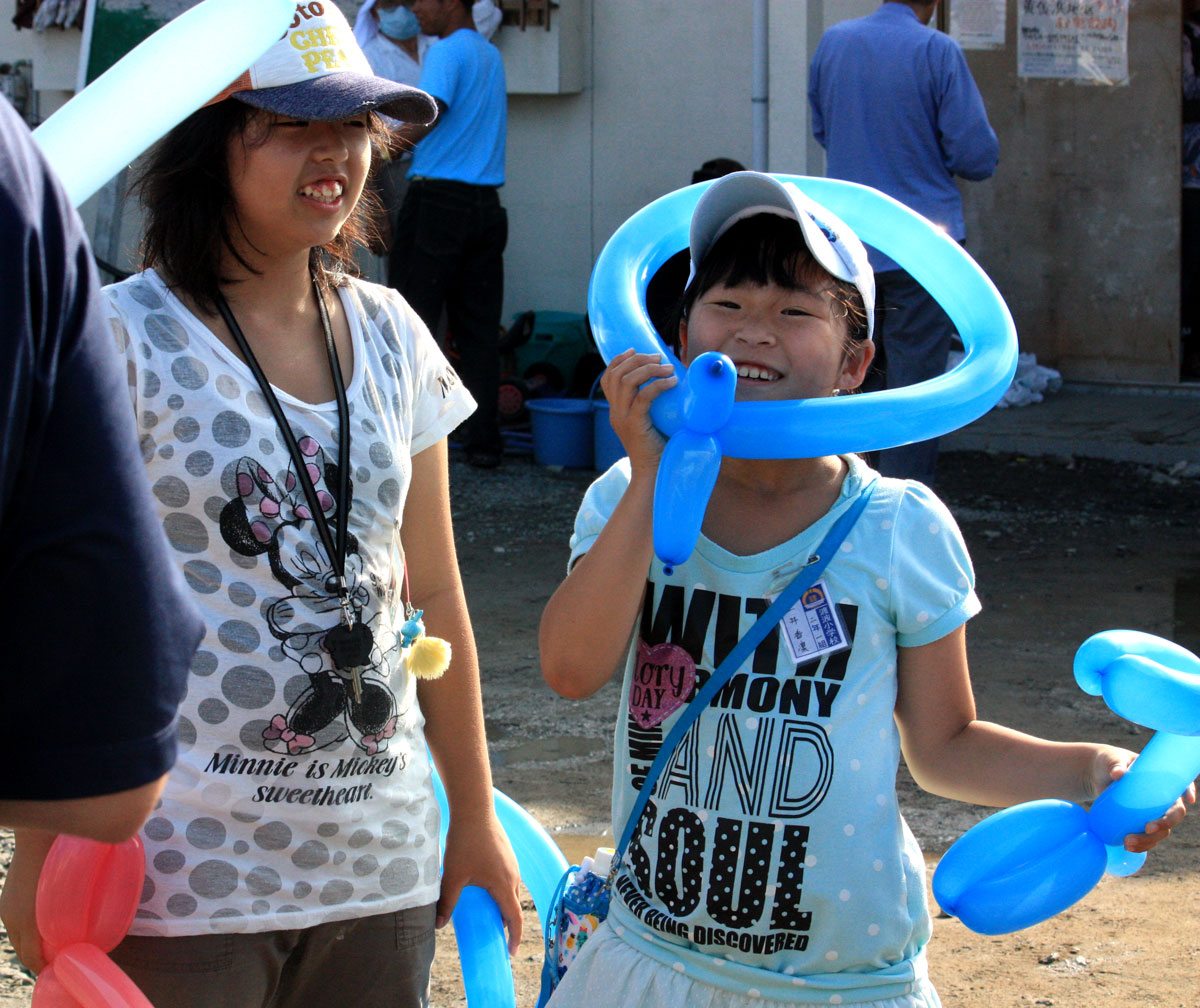 Children in Ishinomaki, Japan, play with balloons provided by relief workers before a cookout for tsunami survivors. (Photo by Erik Tryggestad)

During a play date, the topic of church came up between moms. The mother of my sister’s friend was fascinated by the fact that we not only went to church, but did so three times a week. That’s when my mother learned that Japan is without God — at least in the opinion of one Japanese mother.
Nearly 30 years later, I walked on Japanese soil for the first time with members of a mission team representing CRASH Japan and Global Samaritan Resources. (Read my earlier blog posts about the trip.) Our team helped clean up and distribute aid nearly four months after the March 11 earthquake and tsunami, which claimed more than 15,500 lives.
I can understand why Japanese people — Christian and non-Christian alike — are asking if God is in Japan. The conversations I had with Japanese members of Churches of Christ were among the most gut-wrenching I’ve experienced in my 10 years with The Christian Chronicle.
They didn’t attempt to sugarcoat their emotions. They want to know why this happened. But while they question a benevolent God, they also express faith in him — and a hope for the future — that supersedes my own.
I struggled to do justice to their words in the stories I wrote about the trip. I recently posted the stories on our website, along with some online exclusives:
• ‘God, why did you do this?’ See our main story about church members in Japan coping with unimaginable loss as they assist in clean-up efforts.
I pieced together the above video detailing the damage in Ishinomaki, a coastal city hit hard by the tsunami. You’ll also find a photo gallery of Ishinomaki and Sendai, Japan, with more than 35 images of the devastation and relief efforts.
• Sunday in Mito: See vignettes from church members in Hitachi City and Mito, Japan, who have participated in relief work. 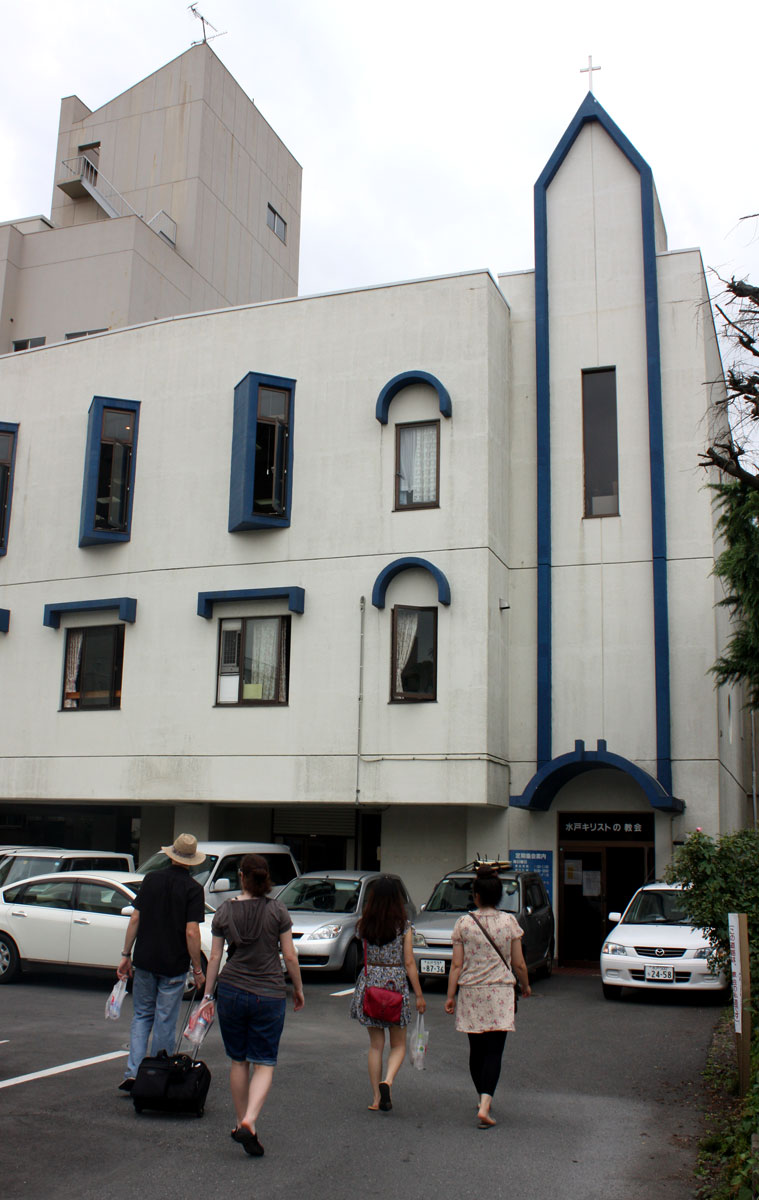 The meeting place of the Mito Church of Christ in Japan. (Photo by Erik Tryggestad)

During the relief trip, our team visited the Mito Church of Christ, one of the largest Churches of Christ in Japan. The bilingual service (in Japanese and English) included a testimonial by Hitomi Yabe, a Japanese-American dual citizen who attended Ibaraki Christian University and participated in an exchange program with Oklahoma Christian University. She showed pictures of her baptism, and I was thrilled to see that it took place at my home congregation — the Memorial Road Church of Christ in Edmond, Okla.
I also enjoyed eating lunch with Miranda Logwood and Allen Thompson, two OC graduates who work with their spouses in Mito teaching English. Logwood’s parents, Paul and Carol Brazle, are missionaries in Antwerp, Belgium. Bobby Ross and I stayed with them en route to Ghana on a reporting trip in 2009. (I wrote a piece about the influence of African Christians on churches in Belgium and the Netherlands based on interviews from that trip.) Thompson is a native of Ethiopia who was adopted by U.S. Christians. (Amanda Jordan interviewed him for a 2010 story about Ethiopian adoption.)
In addition to the story from Mito, you’ll find a gallery of photos from the church service and a video of Sunday worship.

• How to help: Find a list of churches and ministries accepting donations and coordinating relief trips to Japan.
I saw God in Japan — in the eyes of Japanese Christians who are reaching out to people in need even as they struggle to rebuild their own lives. I also saw Christ in the teams of Christians who have traveled across oceans to do what they can to help. I found particularly inspiring the words of Larry Musick, president of Global Samaritan:

“I’m not a numbers man,” Musick said. “I want as many people as possible to become Christians and for us all to be in heaven one day … (but) I don’t think receptivity and numbers necessarily are equal.”
In Japan, “you’re going to see people that, a generation from now, are Christians because of what’s happening now,” he said. “And God can count that — we can’t.”