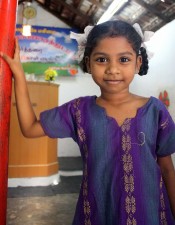 CHENNAI, India — Among the 4.3 million souls who live in this city on the Indian Ocean are six new Churches of Christ. The infant congregations are the result of an ambitious effort by American and Indian Christians, dubbed “50 Lampstands for Chennai.”
Though they didn’t reach their stated goal — 50 church plants in 10 days — members who traveled halfway around the world said the results were worth the long rides in airplanes, taxis and auto-rickshaws.
“It was the most productive two weeks of my life,” said Jeff Skinner, one of seven members of the Simi church in Simi Valley, Calif., who preached seven times and conducted 14 one-on-one Bible studies.
The campaign was based on a similar effort in 1987. That year, church members attempted to “blanket the city with the gospel,” Indian minister Paul Renganathan said. Seven gospel meetings resulted in seven new congregations.
“Back then I thought it was a partial failure and a partial success,” said Renganathan, who had hoped for more meetings and more new churches during the 1987 effort. But two decades later, “all those seven congregations are going strong,” he added.
In 2007, members of the Simi church travelled to Chennai to work with Renganathan. The California church first partnered with the minister while providing relief after the 2004 tsunami.
On their way to worship, Renganathan casually told Simi member Mark Killian, “Look at all these places without a church in Chennai. There’s room for another 200 congregations here.”
Killian reminded Renganathan of Luke 1:37: “For nothing is impossible with God.”
“Well, it is an ordinary saying by Christians. I myself have quoted it many times,” Renganathan said. “But that time … it stuck in my heart.”
Members of the Simi church and the Choolaimedu church in Chennai made plans to blanket the city again with gospel meetings. Killian named the effort, drawing on the use of lampstands to represent churches in the book of Revelation.
As they recruited American church members for the work, organizers faced daunting challenges, including the collapsing U.S. economy. The November terror attacks in Mumbai, India, also raised concerns among Americans about the safety of traveling to the subcontinent.
Despite the challenges, organizers recruited a team of 18, including members of the Hollywood church in Los Angeles, the Van Nuys, Calif., church, the Meadowlark church in Fort Collins, Colo., and the Loveland, Colo., church. Using translators, they conducted 10 gospel meetings.
“Hearts and homes were opened to us,” Skinner said. “We said a lot of prayers for people (and) sat down on the floor with them and studied the Bible.”
People were baptized at six of the campaign sites, and Indian church members are continuing to teach people about Christ at the other four.
“Our guys worked really hard in a nation where, just weeks ago in Mumbai, terrorists were targeting Americans,” said Simi member Bill Henegar, who helped raise funds for the effort. “The Indian Christians of Chennai worked really hard, too.”
Simi member Tyson Gosch said he was impressed by the Indian brethren.
“I came home with a renewed spirit, ready to work harder locally,” Gosch said.
Killian said he and other U.S. church members plan to return to India to continue the effort.
“Long before we left for India, it became apparent to the team that 50 Lampstands would be a multiyear effort if we were to indeed reach our manmade goal of 50,” he said.
The participants seek temporary financial support for the new congregations and funds for similar campaigns in the future.
Renganathan said, “Next time, maybe we’ll ask for 100 workers and see what the Lord provides.”
FOR MORE INFORMATION, see 50lampstands.org