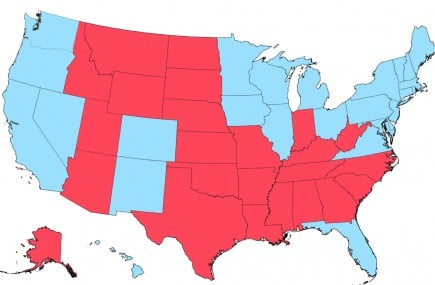 Most Church of Christ members in the U.S. reside in a red state

Bobby Ross Jr.
Are Churches of Christ a red state movement?
Three out of four members in the United States reside in a state that supported Republican Mitt Romney for president, an analysis by The Christian Chronicle found.
Of the 1,554,301 total Church of Christ adherents nationwide, 76 percent — or 1,182,142 — live in a red state, according to the analysis.
Overall, President Barack Obama won the Electoral College by a wide margin, 332-206. The incumbent claimed 26 states — dubbed blue states because they supported the Democrat.
Obama won the popular vote by 3.5 million votes, or 3 percentage points.
The Chronicle reviewed state-by-state adherent data contained in the 2012 edition of “Churches of Christ in the United States,” published by Nashville, Tenn.-based 21st Century Christian.

Almost half the red state Church of Christ adherents — 555,657, or 47 percent — call Texas or Tennessee home. Adherent figures include baptized members as well as non-baptized children and spouses associated with a congregation.
Following the Nov. 6 election, some asked whether Christians have become too identified with a political party.
“Over the course of the last four years, I have been saddened, disturbed and sometimes embarrassed by the politicization of Christian faith and the bitterness, vitriol, spitefulness, ill will, rumormongering, name-calling, ‘doomsdaying’ and unkind speech from many who profess faith in Jesus Christ and claim to represent him as disciples,” Tim Pyles, minister for the Broken Arrow Church of Christ in Oklahoma, wrote in a blog post.
While acknowledging disappointment with the outcome, Kathy Pollard, whose husband, Neal, preaches for the Bear Valley Church of Christ in Denver, said the election prompted her to “put things back into perspective.”
“What really matters?” she asked online. “What will outlast who sits in the Oval Office? What will really make a difference?
“In fact, it’s the only thing that will make a difference. We must get back to being an evangelistic church. For America to be reinstated as a Christian nation, it has to be made up of Christians. And who can accomplish that? Not the president. Or a political party. I can.”
EXPANDED COVERAGE AND READER COMMENTS