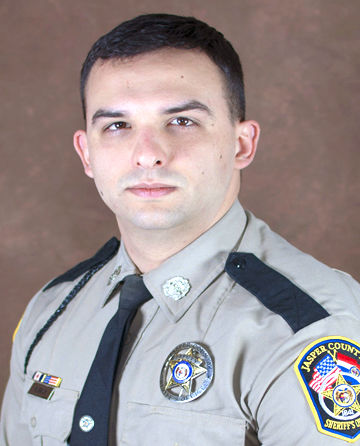 Missouri deputy who was shot is ‘servant-hearted’ (Updated)

Deputy Nolan Murray was shot Wednesday as he and other law enforcement officials served a warrant.
Chellie Ison
UPDATE: A Missouri deputy who was shot in the line of duty has been released from the hospital. The Jasper County Sheriff’s Office says Deputy Nolan Murray had surgery Saturday to remove a bullet from his back. The sheriff’s office reports Murray was doing well and was released from the hospital on Monday.

Original story below.
A Missouri deputy shot in the line of duty is doing well, but remains in ICU.

Jasper County Deputy Nolan Murray, a member of the Hillcrest Church of Christ in Neosho, Mo., was attempting to serve a search warrant at a Missouri Econo Lodge Wednesday when shots were fired from inside the room. Deputy Murray was shot in the back.

The prognosis is good for Deputy Nolan Murray, although he remains in the intensive care unit at Freeman Health System with a bullet lodged in his back, Sheriff Randee Kaiser said during a press conference this morning.

Boggs said he visited Murray and his family at the hospital Wednesday evening. While there he heard another deputy tell Murray he needed to take care of himself.

Boggs says that wasn’t just a passing comment, rather an order because Murray is known for putting the needs of others above his own.

Murray remains in ICU. He is expected to have another surgery soon to remove the bullet that is still lodged in his back.

The man accused of shooting Murray is also hospitalized.

You can find more on this story at www.JoplinGlobe.com.