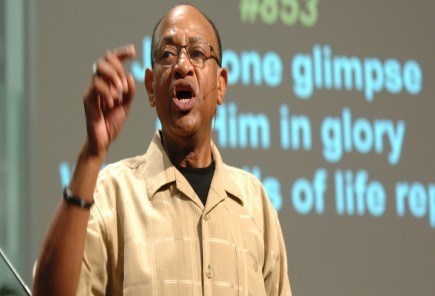 Heather Hahn
LITTLE ROCK, Ark. — When Chuck Monan first took the pulpit of Pleasant Valley Church of Christ, he preached to a booming congregation that was almost entirely white.
“You could count the number of nonwhite people on both hands and feet,” the church’s pulpit minister said.
Seven years later, Monan sees more varied faces when he gazes out at the church’s pews each Sunday.
More than 175 blacks and other racial minorities now regularly attend the church, which has a weekly turnout of about 1,300. Monan attributes that growth in large part to the church’s decision last year to hire Jerome Williams — the congregation’s first black worship leader.
“I don’t think it was ever God’s intention that people would be separated and have nothing to do with each other,” Monan said. “I think that it’s frankly to blame for a lot of the problems that we face in the United States. We’re trying to do something about that.”
During the church’s three services each Sunday, Williams is just as visible as Monan. Williams welcomes churchgoers to worship and, at the end of the service, sends them out into the world. And throughout the service, he leads those gathered in singing God’s praise.
Like most Churches of Christ, Pleasant Valley only allows music — be it traditional hymns, old masterworks or newer praise anthems — to be sung without instrumental accompaniment.
Churches of Christ have roots in the 19th century Restoration Movement, which had the goal of restoring the practices of the early church. Most congregations choose to sing without accompaniment because singing is the only kind of music that the New Testament mentions being used in worship.
Williams, whose official title is worship minister, helps the congregants stay on pitch and in rhythm. He sings out the melody in a loud, clear voice, and he keeps the beat with a stroke of his hand and sometimes a tap of his foot.
“I have people upstairs looking for the drums,” Williams said, “but of course we’re a cappella. … I lead by rhythm, and I would say the overall response has been: Bring it on!”
Williams grew up attending an all-black Church of Christ in Montgomery, Ala. But his first job in the church was as a youth minister for a Tuskegee, Ala., congregation that had been formed by the merger of two small churches — one black, one white. Since, he has only worked in racially mixed churches, including
congregations in Gainesville, Fla., Tulsa, Okla., and New York.
“I’ve always worked in an integrated environment from the beginning,” he said, “so therefore I think you could say it’s in my DNA.”
Since he has joined the church staff, he has added more songs to Pleasant Valley’s repertoire, including more American spirituals and gospel pieces.
One such spiritual — “Get Right, Church” — was enough to get longtime church member Twila Burris humming even as she walked out of worship into Bible class.
“He taught us that song,” said Burris, a retired church secretary who has attended the church for more than 30 years. “We love Jerome.”
Pleasant Valley doesn’t have a choir. But last winter, Williams began offering Celebration, a session at 4:30 p.m. each Sunday, right before the evening service, where he teaches worshipers to sing in four-part harmony.
Rather than sitting together, the group spreads out across the sanctuary, bolstering the congregation’s sound. So far, Celebration has attracted 150 singers, and Williams aspires to teach the group to sing Handel’s Hallelujah Chorus a cappella by Christmas.
Still, churchgoers’ response to Williams hasn’t all been positive.
“What has the reaction been like?” Williams said. “It varies all the way from one extreme of people calling this good news and excitement all the way to ‘Get rid of Jerome.’”
A handful of members complained about Williams and the new music in a recent church survey. One of those polled took issue with Williams’ untucked dress-shirts, saying the worship leader’s Sunday clothes look like “Muslim dress.”
But Monan said he isn’t aware of anyone who has left the church because of Williams. Instead, the church has continued to grow, attracting more black members mostly through word of mouth.
Churches of Christ, like most denominations in the U.S. after the Civil War, spread through largely segregated congregations. Whites had their churches, and the black minority had theirs.
Today, about 13 percent of the roughly 1.6 million members of the Churches of Christ are black, according to the Pew Forum for Religion and Public Life.
Flavil Yeakley, director of Harding University’s Center for Church Growth Studies in Searcy, has long been a consultant to a number of Churches of Christ.
He said Pleasant Valley has taken the right approach to fostering a more integrated church by looking beyond just having white leaders.
“A lot of churches lean in that direction, but they’re not as aggressive as Pleasant Valley,” he said. “I’d like to see more churches really get active.”
Dr. Larry Waller grew up in an all-black congregation but started attending Pleasant Valley when he was a student at the University of Arkansas for Medical Sciences.
“It was a different congregation back then,” he said. “It wasn’t very friendly.”
About three years ago, he and his wife, Christal, gave Pleasant Valley another shot and were pleased with what they found. Both said they liked the changes Williams has brought to worship, and Christal Waller said she has mentioned him when inviting friends to visit the church.
“I think having Jerome here makes people of color want to visit more often,” Christal Waller said. “But I think it’s the friendliness and love of the congregation that keeps people coming back.”
(Story used by permission of the Arkansas Democrat-Gazette )