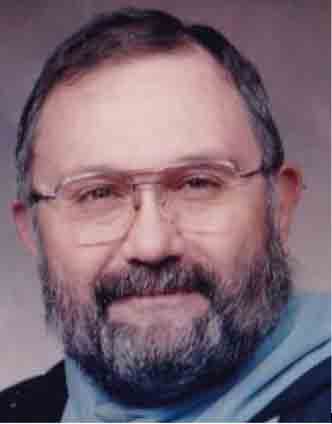 A Man of Purpose
“Come here, young lady. let’s talk about what kind of person you intend to become.” He patted the seat next to him. “All right,” I said, taking him up on his offer. “Tell me what I am supposed to become.”

Dr. Jim BeyerGrandpa smiled his unique half-smile and slowly replied, “Oh no. A good psychologist does not give answers. She listens until they are discovered.”

In addition to his progressive application of pronouns, my grandpa was the kind of man who listened intensely, laughed loudly and spoke slowly, with purpose. Since he passed away 10 years ago when I was 18, I never had a chance to know him as an adult. So I reached out to his colleagues and students to find out more about him, but I have to admit that I was skeptical about the response. For many, it has been 20 years or more since they interacted with Dr. Jim Beyer.

To my amazement, letters poured in from the people whose lives he touched. They have stories about how he listened to them, encouraged them to grow, dared them to succeed and built community.

The ripples of his presence are widespread. For example, Anita Reyna, speaking to a beginning social work class at Lubbock Christian University in Texas this year, described the influence Dr. Beyer had on her career — completely unaware that my cousin, his granddaughter, was in the classroom.

When I asked Anita about her memory of my grandfather, she explained that Dr. Beyer was critical to her success as a social worker. She said, “He impressed upon us that we at times could be Christ’s hands, Christ’s ears, Christ’s feet as we brought compassion, acceptance, comfort and, most of all, hope. We were not to forget that our profession was a gift in which we could earn a living while being a servant for the Lord. What he taught us was so powerful because he lived it. It wasn’t something he read and passed on to us, but he had believed it because he lived it.”

Another student, Susan Nemec, recalled how Dr. Beyer voiced his belief in her ability to accomplish her goals and helped her find her calling in the hospice movement. Twenty-three years later, she was able to talk with him about the conclusion of his own journey. In the dedication of the Jim Beyer Computer Lab at Austin Graduate School of Theology in Texas, his passion for helping others was recognized as “so deep that the early stages of cancer did not prevent him from teaching.”

Dr. John Beyer, Jim’s eldest son, summed up his legacy: “He devoted his life to helping people. He found he could do this best through his work in psychology and social work and as an elder in God’s church.”

I know that grandpa’s relentless focus on compassionate service had something to do with why I chose to become an organization psychologist, and I will continue listening to discover just as he taught me. In grandpa’s copy of “A Man’s Search for Meaning” by Victor Frankl, he had highlighted the sentence, “The truth-that love is the highest goal to which man can aspire.”

I share the sentiments expressed by the letters I received from his students and colleagues because I, too, am richer for having known him. I aspire to live as meaningful a life as Dr. Jim Beyer, my grandpa, the man whose purpose was love. 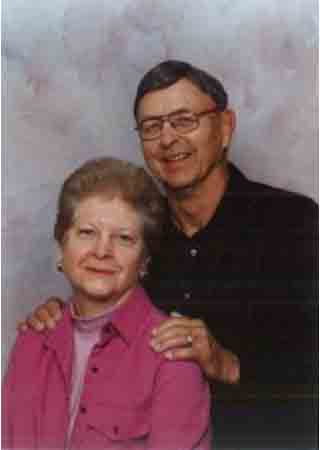 Joe and Ruby TobeyJoe and Ruby Tobey of Wichita, Kan., celebrated their 60th wedding anniversary Feb. 24, 2017. The Tobeys celebrated with their church family and friends at a reception hosted by their three children. The party was held on a Sunday afternoon at the meeting place of the 47th Street Church of Christ in Wichita. Their children are Brent (Tami) Tobey of Edmond, Okla.; Marla (Kent) Treat of St. Paul, Texas; and Lance (Jennifer) Tobey of Leavenworth, Kan. The Tobeys also have eight grandchildren and one great grandson.

The Tobeys have been members of 47th Street since 1963. Joe is currently a deacon and was church treasurer for many years. Ruby taught children’s Bible classes for more than 45 years.

Joe is retired from The Wichita Eagle newspaper,where he was employed for 42 years. Ruby is a self-employed artist. 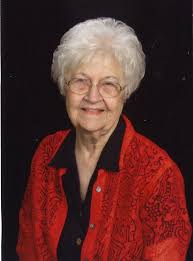 Maxine Self CuddMaxine Self was born Oct. 8, 1924, in Orr, Okla., to James K. and Martha S. Burkett Self. She passed away Jan. 12, 2017, at Mercy Hospital in Oklahoma City at the age of 92 years, three months, and four days. She married Clarence Lesley Cudd on May 2, 1943. To this union, three children were born — Patricia Gail, Brenda Joy and James Lesley.

Maxine grew up the youngest of five children. Her early years were spent in Burkburnett, Texas. When she was in the third grade, her family moved back to Oklahoma, and she attended Zaneis Schools. In her class was a boy named Clarence Cudd. They began dating in their junior year of high school. After graduating from Zaneis, they were married in Wilson, Okla. Maxine was 18 years old, and Clarence was 17.

Clarence soon joined the U.S. Navy during World War II, and Maxine lived with her parents, working at Wacker’s Grocery Store in Wilson, making $2 per day. When the war ended, Maxine traveled to San Diego to meet Clarence. They bought a car and returned to Oklahoma.

Although Maxine and Clarence lived in various locations in the first few years of marriage, they eventually settled in Beaver, Okla., in 1960, where they raised their three children. During those years, Maxine worked in and out of the home helping to support the family. She worked in Beaver for the county school superintendent, the County Clerk’s Office and the local ASCS office. Maxine enjoyed sewing and watching sports (especially the Dallas Cowboys, the Oklahoma City Thunder and the University of Oklahoma women’s basketball). She also enjoyed involvement in church activities and helping others.

In 1985, Clarence and Maxine retired and moved to Edmond.

Maxine and Clarence were both baptized into Christ in 1948. They have been members of the Memorial Road Church of Christ, Edmond, Okla., for the past 31 years.

Maxine was preceded in death by her parents, Jim and Mattie; three brothers, Frank, Famon, and Clair; and one sister, Doris Norton.

She is survived by her husband of 73 years, Clarence, of the home in Edmond; two daughters, Pat (Bill) Hanna, of Edmond, Okla., (although Bill passed away 31 hours later on Jan. 14, at Mercy Hospital); Brenda Bridgmon of Edmond, Okla.; one son, James (Amy) Cudd, of Hinton, Okla.; four grandchildren, Chad (Kim) Hanna, of Edmond; Brad (Lindsay) Hanna, of Edmond; Jared (Kristin) Cudd, of Arapaho, Okla.; and Lacey (Charlie) Pybas, of Yukon, Okla. Survivors also include six great-grandchildren: Hunter Steuart and Hallie Hanna; Traber, Channing, and Daxon Cudd; and Josephine Pybas; as well as many nieces and nephews. 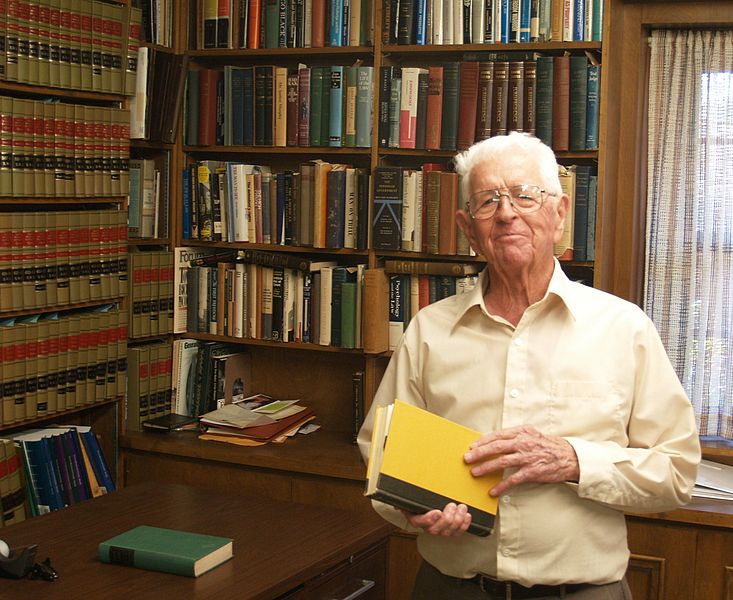 He was a longtime member of the University Avenue Church of Christ in Austin and former president of The Christian Chronicle’s National Council, an advisory body that preceded the newspaper’s current governing board.

The son of Dr. A.J. and Ruth Taylor Pope, he was born in Abilene, Texas, April 18, 1913. He graduated from public schools in Abilene, earned a bachelor’s from Abilene Christian College in 1934 and a law degree from the University of Texas in 1937. While in Austin he met a recent graduate, Allene Nichols. They married June 11, 1938, and began a loving partnership that lasted 66 years.

He volunteered to fight in World War II as a Navy sailor. Instead of fighting in the Pacific, Pope was ordered to Washington to decode enemy telecommunications as a cryptologist.

Texas Gov. Coke Stevenson appointed Pope Judge of the 94th District Court. Then, in 1960, Pope was elected to the Fourth Court of Civil Appeals in San Antonio and elected in 1964 to the Texas Supreme Court. Gov. Bill Clements appointed him in 1982 as Chief Justice of the Supreme Court. His 38-year service is believed to be the longest of any judge on Texas’ highest court. Pope wrote 1,032 opinions, believed to be more than any other judge in Texas history.

He wrote the first “Jury Handbook,” given to those called to jury duty, sponsored the creation of the State Law Library, helped draft the first Judicial Code of Conduct and became a charter member of the Texas Center of Legal Ethics.

He and others established a program that provides legal service to more than 100,000 poor families a year in civil matters such as wrongful foreclosures, domestic violence and veterans who have not received their earned benefits. The money comes from Texas lawyers, not taxes. Gov. Rick Perry in 2012 recognized him and the program with the signing of the “Chief Justice Jack Pope Act.”

Pope was named Outstanding Alumnus of Abilene Christian University and The University of Texas School of Law.

When his father-in-law had his first stroke, Pope brought Allene’s parents to San Antonio to care for them. Grandpa Nichols could not speak, but on so many occasions he thanked Jack with a smile and tears.

Pope was as comfortable outdoors as he was lecturing in the summers at the New York University School of Law. A lifelong camper, he played a mean harmonica at night and then in the morning he could wake you with a bugle call. The Texas Longhorns filled him with happy memories, such as the game against TCU in the 60s when his shoes froze to the floor at Memorial Stadium.

His family visited all the national parks but three by 1960. He and his wife jogged often at Zilker Park in Austin. There is a tree in Zilker Park he would point to and say, “I got my first kiss from Allene under that tree.” That would have been in 1938. He was still walking by that tree in 2013 at age 100.
He developed the Pope Fellows at ACU, which give scholarships to students interested in a career in public service. In 2010, the State Bar of Texas awarded him the Lifetime Achievement Award. On his 100th birthday all the living U.S. presidents and their wives sent letters thanking the Judge for his life of service.

Pope was an incorporator of the Supreme Court Historical Society. The Freedom Foundation of Valley Forge gave him its George Washington Award. The Supreme Court Society published “Common Law Judge” in 2014. The book is a collection of essays, opinions and a biography of this uncommon man.
Pope is survived by two sons, A.J. (Carla) Pope III of The Woodlands, Texas; Allen (Karen) Pope of Castle Pines, Colo. He had three grandchildren; Drew Pope, Ryan (Erin) Pope and Billie Pope (Jeff) Locke and four great-grandchildren, Dylan and Peyton Locke, Carinn and Caitlin Pope, and many nieces and nephews.

Entries should be submitted to [email protected] or call (405) 425-5071. Rates and guidelines are available upon request (credit card preferred)