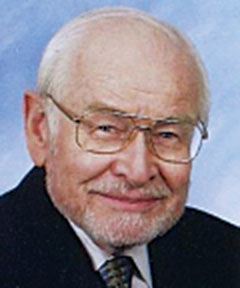 March 7, 1921 - July 12, 2013
Staff Reports
Adair Pinckney Chapman Jr. passed into glory on July 12, 2013, in Dallas, at age 92. He is survived by Nancy, beloved wife of 72 years, two children, two grandchildren and one great-grandchild. Born in Berlin, Ga., and a graduate of Harding College, he became superintendent of schools in Knobel, Ark., at age 21. Adair entered ministry in the mission fields of Georgia and Kentucky and later became minister at established congregations in Kansas City, Kan., Port Arthur, Texas, and Dallas. In 1980, he created a charitable organization, First Century Way of the Cross Ministry, and began one of the first prison ministries in our nation including the largest tape ministry at that time. Adair’s heart burned with an urgent call to lost and forgotten souls. He was instrumental in planting and strengthening many rural churches across the South and Midwest which continue the Lord’s work today.