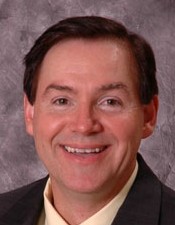 From Staff Reports
DECATUR, Ala. — Mike Nix, minister for the 800-member Beltline Church of Christ since 1998, died June 25. He was 55.
“Our hearts are sad,” church leaders said in a note to members, indicating that Nix developed a blood clot after a recent leg surgery.
The Decatur Daily reported that Nix stepped into a hole and hurt his leg two weeks earlier while performing a wedding. The day before he died, he had performed another wedding with a cast on his leg, his first time to leave home since the surgery.
“If you wanted to see Jesus Christ, you could just look in Mike Nix’s eyes,” church member Calvin McBride told the Decatur paper. “That’s the kind of person he was. I know that’s a huge comparison, because there was only one perfect person, but every day of his life, Mike lived to try to be like Christ.”
Dozens of readers offered condolences and shared memories of Nix on The Christian Chronicle’s website.
“If you did not have the honor of knowing Mike Nix, you lost a great opportunity,” Beltline worship leader Scott Fuller wrote. “I have never seen someone that I thought walked the Christ-like life like he did. His legacy is flawless, his life is complete, and his memory is eternal.”
Dino Roussos, a missionary in Greece, said Nix and his wife, Mary Lynn, traveled to Athens a few weeks before his death. On the trip, Nix preached for the Glyfada Church of Christ in Athens.
“I guided (Nix) to the biblical city of Corinth,” Roussos said. “He was so happy to walk in the steps of Paul. May the Lord comfort his family and the Beltline Church of Christ.”
Besides his wife, Nix is survived by his daughter, Natalie.