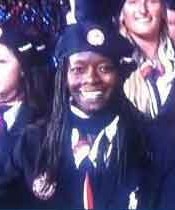 Staff reports
LONDON — Two students — one current and one former — at two universities associated with Churches of Christ will compete for two countries in the 2012 London Olympics.
Sarah Attar, a 19-year-old junior at Pepperdine University, will compete for Saudi Arabia in the 800-meter race.
Attar, who was born in California, has dual citizenship because her father is Saudi Arabian, the New York Times reported.
She and another woman, who will compete in judo, are the first-ever females to compete in the Olympics for Saudi Arabia, a Muslim monarchy that places restrictions on women in daily life, the Times reported.
Janet Cherobon-Bawcom, a graduate of Harding University in Searcy, Ark., will compete for the U.S. in the 10,000-meter race in London.
The Kenya native was one of only four American women this season to run the Olympic “A” standard of 31 minutes, 45 seconds needed to qualify for the Olympics.
“I know a lot of people think that people from Kenya are born runners, but my coaches at Harding will tell you that it was Arkansas, not Kenya, that made a runner out of me,” the 33-year-old told the Arkansas Democrat-Gazette.
Cherobon-Bawcom became an American citizen in 2011 and lives in Rome, Ga., with her husband.