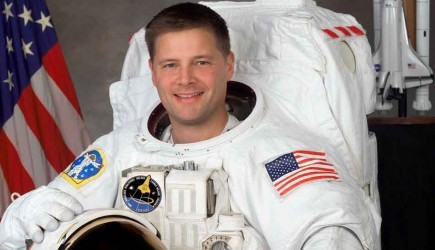 Guest chapel speaker is out of this world

Wheelock talked live via video feed from the International Space Station, where he serves as commander of the six-person crew.

“Chance favors the prepared mind, ” Wheelock said in a somersaulting space talk in which he discussed his Christian faith and promised to return to Oklahoma Christian in the spring — in person.

Regardless of what your goals and dreams are for your life, the most important thing is to put your trust and faith in God and to keep your life at the center of his will,” the astronaut told students at Oklahoma Christian’s daily chapel assembly. “Because when you do that, everything else tends to work out.”

In June, Oklahoma Christian hosted a shuttle liftoff party for Wheelock, and in March, he was the guest speaker at a university fund-raising dinner. While on campus last spring, he spoke in chapel, ate lunch with students and visited several classes.

He has served with the NASA space program since 1998. He was a mission specialist on the Space Shuttle Discovery in 2007, logging almost 400 hours in space and performing three spacewalks. He has served as the primary liaison between NASA and the Russian Space Agency.

Wheelock is scheduled to return to Earth on a Russian Soyuz spacecraft in December.