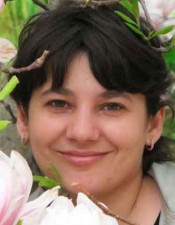 Staff reports
DONETSK, Ukraine — Natasha Tsvyashchenko, Ukrainian operations coordinator for Eastern European Mission, died suddenly Jan 3 after suffering an aneurism. She was 37.
Tsvyashchenko was baptized in 1993. She worked for ministries including a branch of the Bear Valley Bible Institute of Denver in Kramatorsk, Ukraine, and Blagovest, a literature and evangelism ministry.
In 2006, she joined the staff of Eastern European Mission, or EEM, a church-supported ministry that provides Bibles and biblical literature to people of the former Soviet Union in their own languages.
“She was one of the most strategic thinkers I have ever met,” said Bartosz Rybinski, EEM’s vice president for European operations.
Hundreds of thousands of children in Ukraine have access to the Bible in their schools because of her efforts, Rybinski added.
Tsvyashchenko is survived by her husband, Nickoli Plaksin, distribution and special projects manager for EEM.