Blogging live from Vancouver, British Columbia
I’m in the Vancouver airport on my way home from Tokyo. I spent a week with a mission team representing CRASH Japan and Global Samaritan Resources. (See my earlier blog posts here and here).
The team is working this week in Ishinomaki, a town in Japan’s Miyagi Prefecture (a prefecture is kind of like a state) that was hit particularly hard by the March 11, 2011, earthquake and tsunami.
The team raked broken glass and dead fish out of parking lots and playgrounds, installed new drywall in a damaged house and hosted a cookout for the neighborhood. I spent three nights with the team on the floor of a karate dojo outside the city. The dojo’s Sensei has graciously let relief workers stay there.
It’s hard work, but it’s worthwhile. The people of Ishinomaki are noticing.

A view of Shizugawa, Japan, more than three months after the tsunami. (Photo by Erik Tryggestad)

Before I left Japan, I traveled with Jonathan and Michiko Straker to a shelter for tsunami evacuees in a town called Shizugawa, near another town called Minamisanriku. The town was absolutely devastated by the tsunami. Jonathan Straker told me that 1 in 10 of the area’s residents died.
The scene in Shizugawa — even three months after the tsunami — is almost unimaginable. I found myself doing the same thing I’ve done in other disaster areas, including Joplin, Mo. I look through the camera lens and kind of convince myself I’m watching a bad movie. I’m not really there.
For me, it’s a coping mechanism. For the people of Shizugawa, though, this is what their lives have become — day in, day out. I’m including a photo, but it hardly does justice to what I saw.
The Strakers live in Abilene, Texas, where Jonathan is working on a master’s degree at Abilene Christian University. He and his family lived in Sendai, Japan, for five years as missionaries. The quake’s epicenter wasn’t too far from Sendai. We stopped at the Sendai Church of Christ’s building after visiting the shelter.
Teams of relief workers from Churches of Christ in other parts of Japan, including Mito, have used the building in Sendai as a base of operations for relief work. I spoke with Sendai church member Yuko Kawamura about the tsunami, which took the lives of her close friend and her friend’s two children. A neighbor who lives near the church building stopped by and said how encouraged she was to see the teams of Christians going in and out. 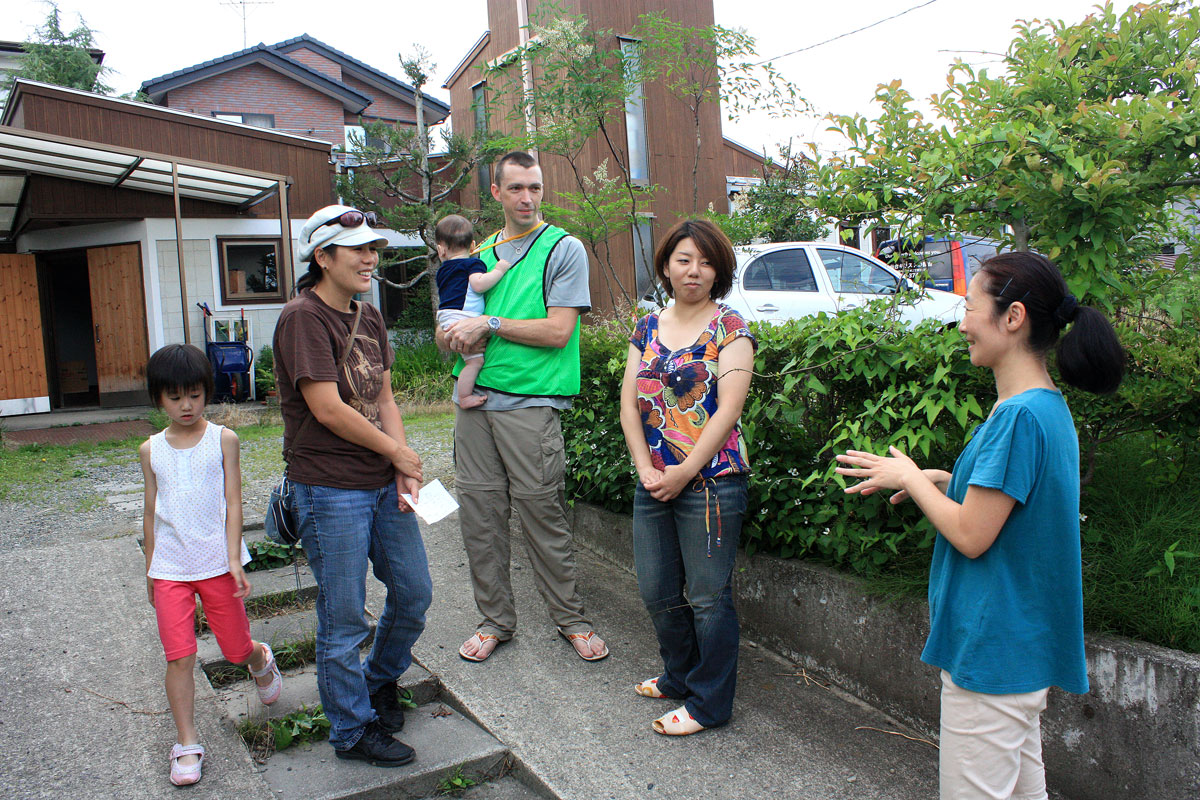 Michiko Straker (in hat), Jonathan Straker (holding their youngest son, Shiori) and Yuko Kawamura talk to a neighbor and her child outside the Sendai Church of Christ in Japan. (Photo by Erik Tryggestad)