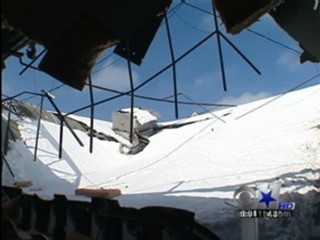 The church’s roof was damaged by a record snowstorm. (Photo via CBS 11 in Dallas)

DALLAS (CBS 11 / TXA 21) – A Dallas church held Sunday services for the first time in its own building since February, when its metal roof collapsed under the weight of a record snowfall.
The more than 800 members of Central Pointe Church of Christ, located at 7740 S. Westmoreland Road in Oak Cliff, have spent the past seven months worshipping in temporary quarters at a nearby church.
Churchgoers said the long-awaited Sunday service proved the members were stronger than the old, warped metal roof that caved after a snowstorm.