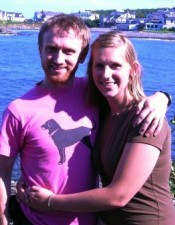 Brooklynne Peters
BOSTON — When asked if they consider themselves church planters, Steve and Chrissy Holt shift uncomfortably in their seats.
“It’s really post-church planting,” Steve Holt explains from the humble apartment he shares with his wife in the Boston neighborhood known as Eastie.
“It’s the next thing. It’s asking, ‘What is the gospel to people who don’t even want anything to do with religion?’”
The Holts have asked themselves that question for the past three years as they have attempted to bring Christ to their New England neighborhood.
The Holts, both 26 and graduates of Abilene Christian University in Texas, are vocational missionaries. Chrissy Holt  is director of finance for a nonprofit, and Steve Holt is a freelance journalist.
They chose Eastie, a mixed-income, ethnically diverse community, partly because they wanted a challenge.
Church attendance here is on the decline, and a recent study by The Barna Group found that only 4 percent of Americans in the Northeast hold a “biblical worldview” — including beliefs that God is all-powerful and absolute moral truth exists.
The Holts knew they couldn’t rent a meeting place, hand out invitations and expect people to show up. So they decided to forgo traditional services and meet with a small group of believers in their neighborhood.
Now they worship with a small congregation of eight to 10 souls that meets in each other’s homes, rotating once a month.
“We wanted whatever happened to be very local,” Steve Holt said.
Instead of singing hymns, they pray and share thoughts about what God has shown them during the week.
Instead of taking communion, they break bread, sharing a meal while remembering the Lord. As the small church grows, the non-traditional service evolves.
“We’re building the ship as we are sailing,” Chrissy Holt said.
‘PROGRAMMED WITH GOD’S DNA’
To evangelize the Northeast, the Holts had to rethink what it means to be an evangelist. They also had to dispel their preconceptions of non-believers.
“The typical assumption (about) the term ‘evangelism’ is the old-school, blank slate idea where people are really devoid of anything spiritual — of all things God,” Steve Holt said. Believers sometimes assume that missionaries can enter a community and merely “download” the good news into its people — who have little or no prior knowledge of God.
“That’s very rarely the way that it works,” Steve Holt said. “At the most foundational level, people are not devoid of God. People are programmed with God’s DNA. They were created in his image.”
At Abilene Christian, where the couple met and married, Steve Holt majored in domestic missions. They participated in The Missionary Residency for North America, headed by professor Ken Smith. The Holts credit the program with challenging them to ask the right questions, focusing on reaching their community by practicing basic spiritual disciplines such as serving their neighbors and helping the poor.
Although their college experience helped them prepare for evangelism in the Northeast, the couple struggled to reach across social and economic boundaries after moving to Eastie in 2006. Surrounded by people they had a very hard time relating to, the Holts learned that living in the same place didn’t necessarily mean that they were all the same.
One of the couple’s neighbors, for example, was a single mother of six who had lost four of her children to Social Services. Her abusive ex-husband’s family fought to have her children taken from her after she had him deported.
“There are . . . things we don’t understand about other people’s experiences — that we’ll never understand — and areas of their lives that they may never invite us into,” Steve Holt said.
Despite the differences, the Holts got to know the woman by inviting her to worship with them and now consider her among their closest friends.
Meeting — and serving — people where they live is vital to reaching those with no connections to church, said Todd Ramsey, a member of the Central church in Wichita, Kan., and co-founder of the Breathe Movement, an evangelistic effort geared toward non-Christians. Ramsey and his coworkers have reached out to their community by holding church services in homes — or restaurants.
Without meeting people where they live, “I have no idea how I would have grown comfortable discussing significant issues with them,” Ramsey said. “I have no idea how I could bring up God with them.”
NO HIDDEN AGENDAS
Although friendship is key to evangelism in Boston, the Holts reject the idea of befriending neighbors for the sole purpose of converting them.
“We can’t have any hidden agendas,” he said. “It’s totally useless. If we’re living the way Jesus taught us to live, our agendas are going to be crystal clear. We are going to live a prophetic life that is a beautiful contrast to the way of the world.”
The Holts hold up the second chapter of Acts as their model for evangelism. The final verse of the chapter describes the first Christians as having “everything in common,” devoting themselves to each other and the study of the gospel.
“It’s the idea that God is rescuing the earth,” Steve Holt said. “It involves being stewards of creation and the environment, being workers of justice and neighborhoods, building community, bringing peace to those who have none, giving to the poor — basically, working with God to rebuild all the broken areas of our world.”
In Boston, that often means shoveling snow off a stranger’s doorstep, helping a neighbor pay for groceries or sharing a meal with a newcomer.
“As long as we’re reflecting God, that’s evangelism,” Steve Holt said.
READ THE HOLTS’ BLOG at harvestboston.wordpress.com .