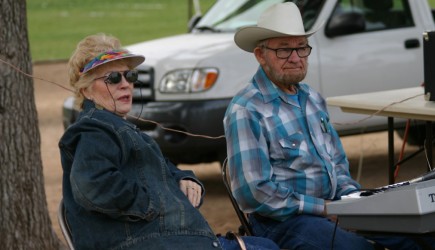 Bobby Ross Jr.
Leaders of the Mountain Avenue Church of Christ in Tucson, Ariz., say church members Dorwan and Mavy Stoddard went to the Safeway supermarket near their home Saturday morning, Jan. 8, to see Rep. Gabrielle Giffords, who was hosting a “Congress on Your Corner” event for voters.
The Stoddards — described as “the lifeblood” of the 120-member congregation — were among the shooting victims when a gunman opened fire outside the store.
The Democratic congresswoman was shot in the head and listed in critical condition. Six people — including Dorwan Stoddard, 76 — were killed in the rampage that wounded a dozen others, according to church leaders and news reports.
Dorwan Stoddard “has gone to be with the Lord,” said Bobby Valentine, pulpit minister of the Palo Verde Church of Christ in Tucson.
Stoddard’s wife, Mavy, suffered three gunshot wounds to her legs and is in stable condition, leaders said.
“They were active members in the church. It’s a big tragedy,” said Valentine, who knew the couple through a Bible camp board and joint activities between the two congregations. “Prayers are the biggest thing right at the moment. I don’t know any details in terms of the services.”
The Arizona Daily Star reported that the retired couple were standing in line waiting to meet Giffords when a gunman, later identified as 22-year-old Jared Lee Loughner, reportedly began shooting a semiautomatic weapon.
Jessica Knapp, who works with the youth group at the Mountain Avenue church, told The Christian Chronicle that Dorwan Stoddard tried to protect his wife during the rampage and was hit in the head.
“He got on top of her and tried to shield her,” said Knapp, relaying information from church secretary Jody Nowak. Nowak and her husband, Mike, the church’s minister, called Knapp from the hospital where Mavy Stoddard was being treated.
Besides Dorwan Stoddard, The Associated Press identified those killed as U.S. District Judge John M. Roll; 9-year-old Christina Taylor Green; Giffords aide Gabe Zimmerman, 30; Dorothy Morris, 76; and Phyllis Schneck, 79.
Chronicle reader Teresa Russell Nystrom wrote on the newspaper’s Facebook fan page: “Dorwan and Mavy have worked on benevolence at MACC for years. They put their hearts into helping others that goes far beyond buying groceries. They have changed lives.”
Dozens of Christians from across the nation offered their condolences on the Chronicle’s news blog. The Stoddards’ granddaughter commented: “Thank you to everyone for your thoughts and prayers. My grandfather was an amazing man. If you knew him, it is no surprise that he gave his life for his loving wife. They gave everything to each other and were among some of the happiest people I’ve ever know. R.I.P. Grandpa Dorwan. We’ll always love and miss you.”
Knapp, a Mountain Avenue member for about 11 years, described the Stoddards as “the lifeblood of our church.”
“This is going to be a huge hole in our congregation,” Knapp said.
“They were our benevolence committee,” she said of the Stoddards. “They did the job fantastically. Instead of just writing checks, they would go meet with people and find out what was going on in their lives and what their needs were.”
If there was a men’s work day at church, Dorwan Stoddard didn’t just show up; he organized it, Knapp said.
“If the baptistery was leaking, we called Dorwan,” she added.
Read updates and more details on the Chronicle’s news blog.