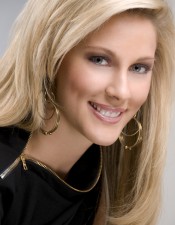 FROM STAFF REPORTS
EDMOND, Okla. — Emoly West remembers being 7 years old and watching the Miss America Pageant on television with her grandmother, the Tulsa World reported.
“That could be you one day,” her grandmother told her.
Her grandmother was right.
West, 24, a member of the Memorial Road Church of Christ in Edmond, recently was crowned Miss Oklahoma.
The University of Central Oklahoma senior will compete in the Miss America Pageant in Las Vegas in January. She is the daughter of Memorial Road church members Jack and Stephanie West.
Her platform in the scholarship pageant is leadership and character development.
She is working toward a degree in dance performance with a minor in broadcast journalism, the World reported. She also hopes to become a sports correspondent at the Olympics.
Should she win the Miss America title, she would not be the first church member crowned Miss Oklahoma and Miss America.
In 2006, Jennifer Berry won the national pageant three months after she was baptized at the Skiatook Church of Christ, north of Tulsa.