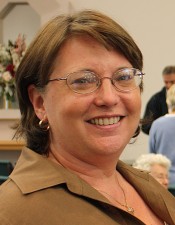 Erik Tryggestad
CASTLE ROCK, Colo. — The helicopter crash that claimed Dan Balcom’s life made his wife a missionary.
Balcom, a retired pilot instructor for the U.S. Army, had studied the Bible with more than 30 Congolese while working for an oil company off Africa’s west coast.
“Dan used to say he was God’s pack mule” Jean Balcom said of her husband. Before each trip, he loaded his suitcases with Bibles and school supplies for his students.
“He just had to share his love of God everywhere he went,” Jean Balcom said.
On May 9, Dan Balcom died as he attempted to make an emergency landing on an oil tanker. Four months later, Jean Balcom, a member of the West Fayetteville church in Tennessee, traveled to this small city between Denver and Colorado Springs to attend the French World Mission Workshop — and to make plans to continue her husband’s work.
“The devil did not win,” she said, tears and determination in her eyes.
Though home to more than 62 million souls, the massive Democratic Republic of Congo receives less attention and mission funds from Churches of Christ than many other African nations, workshop attendees told The Christian Chronicle. Missionaries and indigenous believers from French-speaking nations in Africa, Europe and the Caribbean gathered at a camp in the Rocky Mountains owned by the Castle Rock church before the conference to pray and discuss the status of their work. One by one, each named cities with large populations and no Churches of Christ.
“If you gave me 28 people, trained, I could put them to work immediately,” said Bren White, director of Operation French World, a ministry that sends mission teams to French-speaking countries.
For example, many Western Europeans have shown increased interest in spirituality in recent years, said Yann Opsitch, a native of France and a mission coordinator for Abilene Christian University in Texas. Workers are needed, but churches hesitate to commit people and resources to cities where conversions come by the handful — over a period of years.
“We cannot neglect the difficult places,” Opsitch said. “We should have strongholds there.”
‘SPIRIT-LED PERSISTENCE’ NEEDED
Belgium used to be an unreached nation, said S.F. Timmerman, a minister who moved there 60 years ago with his wife, Maxine. Timmerman spent 16 years planting and nurturing churches in the country’s French-speaking region.
Timmerman, now 90, told workshop attendees that the gospel has spread through Western Europe in the past half-century. But “not like we’d like to see it spread,” he added quickly.
“Oh, there are so many cities, there are so many people in France, Belgium, Switzerland that have never heard the gospel,” he said. “We’ve tried to get it to them, but it’s not easy when people are not interested in it and won’t listen to you.”
Bringing Christ to the unreached often requires patience and stamina, said Willie Gley, a native of the West African nation of Ghana who does mission work in neighboring Togo.
“Only through spirit-led persistence will these people hear the convincing gospel of Christ,” Gley said.
But eager missionaries must not strong-arm potential converts into baptism, he said, noting Jesus’ parable of the prodigal son. In the parable, the prodigal son decided on his own to return to his father.
“Brethren, do not go and force evangelism on people who are yet to respond to the prompting of the Spirit,” Gley said. He urged his audience to “pray more, give more and do more to reach the lost.”
“Let us feel distress for people who are dying everyday … going to a Christ-less eternity,” he said.
WANT-ADS FOR SEED SOWERS
During the conference, church members discussed plans and dreams to reach little-evangelized locations around the globe.
This winter White and his son, Bjorn, plan to travel to the Caribbean island of Guadeloupe to help a small body of believers there plant a new church. White and Ohio church member Jean-Claude Schmidt also are planning a survey trip to St. Pierre and Miquelon, islands governed by France off the coast of the Canadian province of Newfoundland.
“There has never been a New Testament church there,” White said.
In Brussels, Belgium, a group of French-speaking believers needs a full-time minister, Timmerman said. David Kee, a church elder in Newnan, Ga., talked about the need for additional workers in Madagascar, where young churches are growing. Missionary Keith Percell asked mission-minded couples to consider short- and long-term work in Quebec, Canada.
Jean Balcom plans to travel to Haiti to work with Roberta Edwards, a North Carolina church member who helps orphans and impoverished children in the Caribbean nation’s capital, Port-au-Prince.
She’s also working with Barry Baggott, a former missionary to the Ivory Coast, to continue her husband’s work. Baggott, who oversees a ministry that produces French gospel literature in Nashville, Tenn., traveled to the Democratic Republic of Congo after the workshop to assist small groups of believers there.
Baggott planned to spend time in Muanda, the town where Dan Balcom had studied with his Congolese coworkers.
Jean Balcom hopes to travel to Muanda and start an orphanage someday, she said. She’s also helping Baggott supply Bibles and study materials to Muanda’s people — including a young Congolese boy named after her husband.
“Little Daniel must be able to learn about God,” she said, “and with Barry’s help he will maybe even become a minister for the Congo people, teaching where his namesake taught. What a blessing that would be!”
•••
MISSION PROFILES

Justin Dauner
A native of France, Dauner comes from a family with deep roots in Churches of Christ. He is the grandson of Don and Collette Daugherty, longtime missionaries in Paris, and the son of Max and Prisca Dauner, workers in Marseilles. Justin Dauner recently completed a master’s in theology and plans to work with the church and missionaries in Marseille. He seeks support for his ministry.

Gabrielle and Jean-Claude Schmidt
The Schmidts were born in France, but born again in America. They attend the Bright Road church in Findlay, Ohio, and became U.S. citizens earlier this year. The couple does translation work for Operation French World and is assisting with a church-planting effort in Colmar, France, close to Jean-Claude Schmidt’s birthplace.

Jessica and Garrett McGilvray
The McGilvrays came to the French World Mission Workshop from their home in Henderson, Tenn. They have traveled to Vervier, Belgium, as part of a program at Freed-Hardeman University in Henderson and have worked with minister Jean Grenier in the Saguenay region of Quebec. They plan to pursue mission work after Jessica McGilvray completes her master’s in education. “I’m ready, especially after all this,” Garrett McGilvray said at the workshop.