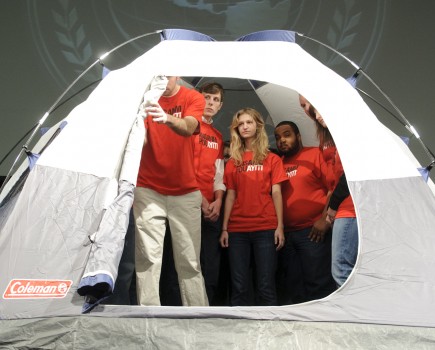 Bobby Ross Jr.
Bryan Clifton could see the faces.
The Harding University student association president traveled to Haiti three times on mission trips with his home congregation — the 37th Street Church of Christ in Snyder, Texas.
“I have lots of personal friends who are from Haiti,” the 21-year-old said after a 7.0-magnitude earthquake struck the poor Caribbean nation Jan. 12 and killed at least 150,000 people.
Inspired to act, Clifton reached beyond Harding’s Searcy, Ark., campus and helped organize a relief effort involving Christian universities across the nation.
“It’s a tremendous opportunity to be able to see a problem, see a need,and just come together as believers to show Christ to people who are insuch desperate need,” Clifton said. “To me, it’s what God called us todo.”
Harding, Faulkner University in Montgomery, Ala., Freed-Hardeman University in Henderson, Tenn., LipscombUniversity in Nashville, Tenn., Oklahoma Christian University inOklahoma City and Pepperdine University in Malibu, Calif., combinedforces.
Students sold T-shirts with the Creole phrase “Ansanm pou Haiti” on thefront and its translation “Together for Haiti” on the back. Hardingstudent Jonathan Alexander designed the logo.
Proceeds were earmarked for Haiti relief in what Clifton called an effort to “show that we are in this together for Haiti.”
After a survey trip to Haiti by Harding political science professor Mark Elrod and freelance journalist Phil Holsinger, that relief took the form of a project called “Tents and Tarps.”
As a result of the earthquake, a large portion of the population in the devastated capital of Port-au-Prince now lives in “tent cities” that have sprouted up in public parks, soccer fields and anywhere there is room, Elrod and Holsinger discovered. However, many of the tents are made up of nothing more than sticks, ropes and cloth sheets.
The Tents and Tarps project has a goal of providing at least 4,500 tents to the people of Port-au-Prince.
“One tent will provide shelter for one Haitian family,” Clifton said. “Many times, that includes up to 20 people.”
John Gordon, Faulkner’s student activities director, said of the T-shirt sales: “While another shirt might not be exactly what you need, shelter from the elements is exactly what so many Haitians need.”
A related project, using a Web site called GiftCardGiver.com, letstudents donate leftover gift cards from the Christmas season.
“At the core of our Christian beliefs is a call to help our fellow man,” said Greg Lee, Pepperdine’s student president.
Amid the aftershocks, students at Christian universities and K-12schools associated with Churches of Christ responded with countlessacts of generosity and compassion.
At Clarksville Christian School in Tennessee, students donated $462.65.Many earned the cash by doing extra chores, while a kindergartner gavehis “tooth fairy” money, head of school Lisa Tucker said.
Courtney Shuman, a student at Lubbock Christian University in Texas,and her husband, Landon, adopted a 3-year-old Haitian orphan.Courtney’s grandmother operates an orphanage in Haiti.
“The Shumans made plans to adopt a girl over the holidays,” said RandalDement, assistant vice president of student affairs. “It is typically afour-year process. With the quake, the timeline is quickened.”
Twenty-three girls from an eighth-grade Bible class at Columbia Academyin Tennessee used Christmas gift cards to buy toothbrushes, toothpaste,combs, brushes, bandages, soap and shampoo for Haiti “survival kits,”teacher Michelle Shrader said.
At Riverside Christian Academy in Fayetteville, Tenn., the studentcouncil sponsored “Hats on for Haiti.” For a $2 donation, students wereallowed to wear a hat all day at school, student council sponsor DanaEldridge said.
In Georgia, Greater Atlanta Christian School raised more than $18,000for the Eternal Hope orphanage in Haiti, where the school sends missiongroups.
Students at York College in Nebraska organized “In Their Shoes — Hope for Haiti,” selling shoelaces with the logo on them.
“Shoes are hard to come by in Haiti, and it is something we all takefor granted,” said Mitchell Roush, student association vice president.“Wearing the shoelaces is a feasible way for students to donate, andwearing them is a physical reminder of the ongoing struggle going onright now in Haiti.”
David Vanderpool, a senior at Abilene Christian University in Texas,helped his father, David, and a team of medical missionaries on theborder Haiti shares with the Dominican Republic.
After returning to Abilene, Vanderpool and a group with GlobalSamaritan Resources began planning a trip back to the quake-ravagedregion.
“Yes, I’ve seen the bodies being burned on the beach. Yes, thesituation is dismal,” Vanderpool said. “But it’s not impossible. I haveseen the work that is being done to help the injured and the survivors.I’m optimistic.”