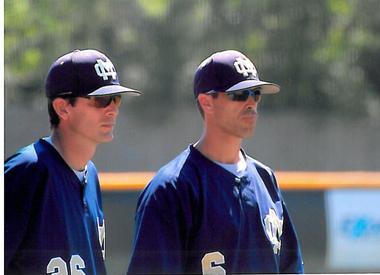 The Mobile Press-Register in Alabama reports on Talley Haines and Jason Smith, both of whom attend the Regency Church of Christ:

MOBILE, Alabama — “Anyone who has played or coached baseball knows how much failure comes with the game,” says Talley Haines, head baseball coach at Mobile Christian School. “If kids can learn how to deal with failure through baseball, it has been worth their time.”
Haines became the head baseball coach at Mobile Christian just over a year ago; Jason Smith became the assistant coach in January. They’ve been good friends since 2002, when they were teammates on the Durham Bulls, an AAA affiliate for the Tampa Bay Rays in the International League.
The Leopards finished 6-19 last season with a starting lineup that included a seventh-grader, an eighth-grader and two freshmen.
“Our kids will be better in the long run from this varsity experience,” said Haines, who feels his most important responsibility as a baseball coach is to teach players life lessons through baseball.
“Talley and I are able to share our perspectives and learn from each other,” Smith said. “Other than trying to teach our players the game and how to play it, we try to teach them that life can be a lot like baseball when dealing with failure.”