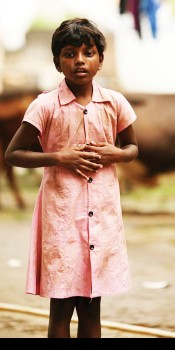 Kimberly Mauck
In recent years, social justice has moved to the forefront of many churches’ missions. Rather than taking the Good Samaritan approach of helping the hurting soul in your path, Christians have preached Martin Luther King Jr.’s message of “injustice anywhere is a threat to justice everywhere.”
Or, as the slogan of the new film “Not Today” says, “None of us is free if one of us is enslaved.”
Unlike the films produced by Sherwood Baptist Church in Georgia (“Courageous,” “Fireproof,” “Facing the Giants”) “Not Today” focuses on a global problem — human trafficking. The film highlights the despicable practice of children sold into sexual slavery in India.
Friends Church, the Orange County, Calif., congregation that produced the film, has committed $20 million to building schools for India’s lowest, neediest caste, the Dalits, to combat the problem. “Not Today” is one of its fundraisers.
The film follows Caden Welles (Cody Longo), a 20-something socialite who travels with friends to Hyderabad, India, on a whim. After a night of hard partying, Welles wakes up in a slum and is helped back to his hotel by a Dalit, Kiran (Afghanistan native Walid Amini) and his daughter, Annika (Persis Karen, herself a Dalit). The film’s title comes from the phrase Kiran uses to reassure Annika — today is not the day we die. One day we will, but not today.
As Welles prepares to return home, he again encounters Kiran, who has sold his daughter to a man who promised them both a better life. Welles knows this can’t be true, and he spends the rest of the film in a desperate, prayerful search for Annika into the Indian countryside and through the brothels of Mumbai.
The film is beautifully shot, with lush panoramas of India’s countryside and horrifyingly real images of its slums. It portrays the smiling cruelty of the brothel owners, who exploit young children with a sickening coolness. It is encouraging to see heartfelt prayers uttered aloud on the big screen.
The uncomfortable collision of indulgent American Christianity and real Indian suffering is satisfying, in some ways. As Welles follows his quest to free Annika from slavery, he trades his prized watch to buy two other little girls he can’t stand to see remain in the brothel.
In other ways, the mix of the two worlds is frustratingly hostile and patronizing. Welles screams at Kiran, “You don’t get to judge me! You sold your daughter into prostitution!”
Later their relationship apparently is healed, as Caden buys Kiran new clothes, identical to Caden’s hipster apparel. Skinny jeans, it would seem, cover a multitude of sins.
The film highlights different approaches to ministry — social justice versus Gospel preaching. Ideally, these two should not be in opposition. At one point, Kiran attempts to start a conversation about Jesus, but Welles, too wrapped up in the drama of rescuing Annika, lets the subject drop.
Drama this film has in abundance — some of it the petty, poorly acted American variety, and some of it, the real, Indian version. It is indeed a hodgepodge of successes and failures.
But, in the end, it does succeed in drawing attention to the fact that many stars are missing in India: thousands of young girls are unwittingly sold into dark places that Christians don’t like to think about. This film will force us to think about this, and perhaps, to act.
Watch a preview at www.nottodaythemovie.com.