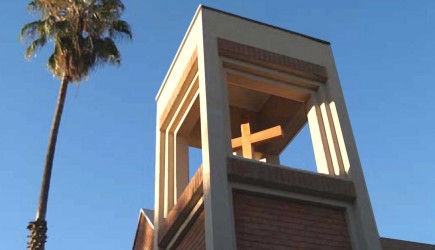 Erik Tryggestad
Churches of Christ in the Chilean capital of Santiago are preparing for a massive relief effort after an 8.8-magnitude earthquake struck the South American nation.

The Feb. 27 earthquake — greater in magnitude than the quake that devastated Port-au-Prince, Haiti — struck near the Chilean coastal city of Concepcion.

More than 700 people died, and the quake created a tsunami in the Pacific Ocean, according to news reports. Tens of thousands in the quake zone are forced to live outdoors because of damaged homes.
There are two Churches of Christ in the Concepcion area — the Coronel and Chiguayante congregations. Manuel Soto, a minister in Santiago, said that one of his family members was able to make contact with some members of the Coronel church.
“They are fine, but they are worried about the members in Chiguayante,” Soto told The Christian Chronicle March 1. “They are still unable to contact them.”
In Santiago, about 270 miles north of Concepcion, the quake registered as magnitude 7.0.
“The Earth moved below us, but we got out of the house in time,” Soto said. The house where the minister and his wife, Melissa, live did not suffer significant damage. But the home of Soto’s parents was damaged.
“We have communicated with almost all the members in our church and they are just shaken up and experiencing power and water loss,” Soto said. The congregation did not meet for Sunday worship because its building was damaged during the quake.
MOBILIZING FOR RELIEF
The building of another Church of Christ, the Providencia congregation, survived the quake and has power, water and Internet access, said missionary Jeff Hatcher. The church is offering the facility for use as a collection point for donations.
“We hope to take advantage of this situation in order to touch peoplewith the love of Christ,” Hatcher said. “We’re convinced that (God)has blessed us so that we can be a blessing to others.”
Church members are in touch with local authorities about providing aid to the hardest-hit regions of Santiago, said Scott Emery, another missionary who works with the Providencia congregation.
“It seems that some of these areas in the metropolitan region are being overlooked in the face of the greater urgency felt in the Concepcion-Talca area,” Emery told The Christian Chronicle March 2. “While Santiago was not nearly as hard-hit as those southern cities, there are pockets of destruction — mainly older structures and in some cases newer ones that were poorly constructed — here in Santiago, those largely in the poorer communities.”
“We feel that in some respects, our church can do more to help them locally and it will afford us a better, more immediate opportunity to mobilize our congregation,” Emery said.
The church also is making plans to receive contributions from U.S. churches.
“While details still need to be worked out, it is most likely that those funds will be used for some aid operations in the near future that the Providencia church will carry out alongside churches in the affected areas to the south,” Emery said.
HARDING PROGRAM WILL CONTINUE
The quake will provide unique opportunities for 33 Harding University students to serve the people of Chile, said Jeffrey Hopper, dean of international programs.
The students are scheduled to leave Searcy, Ark., for Vina del Mar, about 280 miles north of the epicenter, to participate in a study abroad program — Harding University in Latin America, or HULA. The program’s director, Tom Hook, said that the HULA campus was undamaged.
“I can’t ever say that a place is safe,” Hopper told The Link, Harding’s student news Web site. “If you are in the world, you have to face the chance of disaster.”
Spencer May, a student in the HULA program, said he and his fellow students are eager to participate in relief and clean-up efforts.
“I’ll be able to connect and get to know people easier (that way),” May said. “(But) it is definitely a blessing we weren’t there yet.”
CONTRIBUTIONS FOR CHILE RELIEF MAY BE SENT TO:
Saturn Road Church of Christ
c/o Robbie Chalk
3030 Saturn Rd.
Garland, TX 75041
Please note “Chile Relief Fund” on checks.