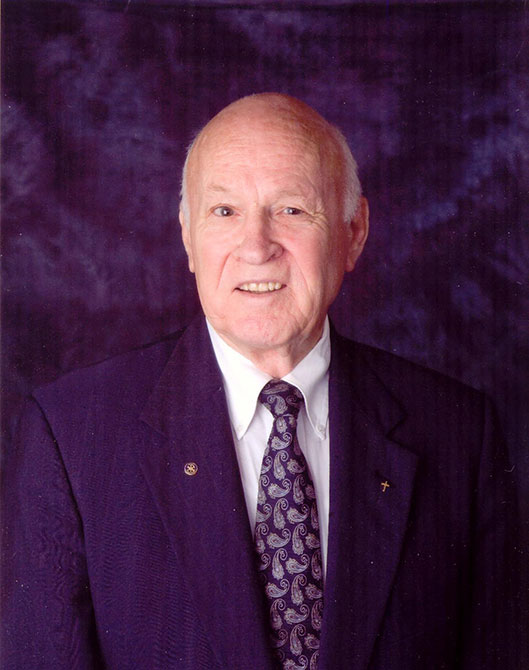 Jonathan Cannon
In 1948, when a young minister named Clinton Brazle and his wife, Faye, traveled to Washington state to visit an aunt, they drove through Bozeman, Mont.
In Bozeman, a city of 27,000 that sits in a valley surrounded by mountains, Brazle saw a sign for Clinton, Mont., about 190 miles away.
“There’s my town!” he said to his wife, referring to his first name. “We should live here one day.”
He wasn’t far off. In October 1950, the Brazles’ ministry brought them back in Montana to work with the Bozeman church, about 100 miles north of Yellowstone National Park.
Little did Brazle know that he would devote most of his 60 years of ministry – and counting – to Montana, a sparsely populated state with 45 Churches of Christ and a combined membership of about 2,000.
During his senior year at Oklahoma A&M College, now Oklahoma State University, Brazle arranged to preach in nearby Ripley, Okla., every Sunday morning. He completed his degree in agricultural economics in 1948, but devoted himself to ministry, not farming.
When he moved to Bozeman in 1950, he found a congregation with 16 members — a number that would quadruple to about 65 in his eight years there. Today, the Bozeman church averages attendance of 235, making it one of the largest congregations in Montana.
COW-MILKING AND MINISTRY
Along with preaching, Brazle worked as the co-publisher of the Montana Vineyard, a quarterly publication of progress in churches throughout Montana. It is now available online at www.montanavineyard.com.
Brazle also spoke on a radio program, the Daily Bible Hour, which reached people throughout the area.
Among the listeners were Lowell and Shirley Curtis. The couple listened to the program for several months. After learning this, Brazle began visiting their home to study with them.
“I went to see them, studied with them every week for three months, and I took them to the irrigation ditch and baptized them,” Brazle said. But he did more than just minister to the Curtis family. He also helped in practical ways. 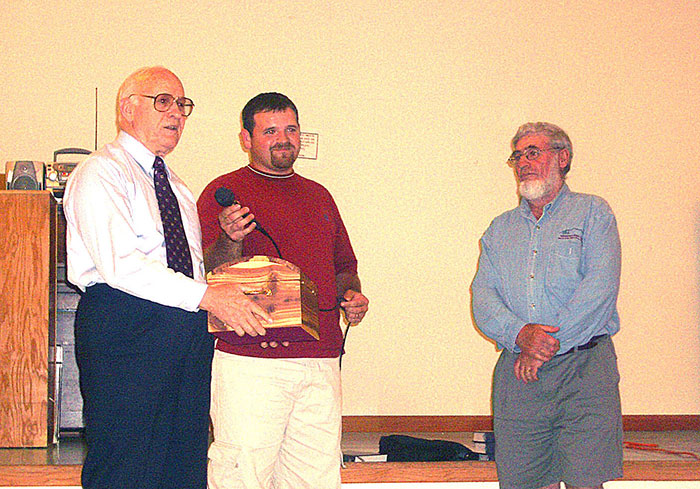 At his 80th birthday party, Clinton Brazle, left, receives a cedar chest made by son-in-law Dave Muller, right, an elder of the Dauphin, Manitoba, church in Canada. Presenting the gift is Brazle’s grandson, Josh Muller, youth minister for the Church in the Falls, a Church of Christ in Cuyahoga Falls, Ohio. (PHOTO BY PAUL BRAZLE)

“He’d get there early enough to … help me clean out stalls or milk cows,” Lowell Curtis said. “He (struck) me as being really down to earth and not someone who would just sit in the house waiting on you.” Lowell Curtis later became an elder at the Bozeman church.
Brazle also worked with youth during his time in Montana and was involved in the purchase of the Bow and Arrow Ranch in 1956. The ranch later became Yellowstone Bible Camp in Pray, Mont., about 45 miles southwest of Bozeman.
The camp now serves more than 1,600 adults and students each year and holds annual camp sessions from Memorial Day to Labor Day, bringing together Christians from all over the state.
The wisdom of Clinton Brazle and the other founders, to put a camp in this location, has allowed brothers and sisters throughout the state of Montana to really get to know each other, which is an unusual thing for a state this size,” said John Free, the camp’s director.
Brazle also helped plant a church in Anaconda, Mont., which started with two families. The Brazles spent four years in Anaconda and helped build a new church building. Today, the Anaconda church has an average attendance of 55 people.
The Brazles later moved to Weyburn, Saskatchewan, in Canada, where they worked with the Airport church. Brazle led a group of boys he called the Young Timothys, which he describes as his biggest success.
The group met at 6:30 a.m. to practice speaking and song leading. Brazle had 84 young men go through at least one session of the class during its 21 years, including Brazle’s four sons. All four are now involved in ministry.
Paul Brazle remembers giving two-minute sermons in his father’s training program. He delivered his first official sermon at about age 12, “and I think it was about six minutes long,” he said.
Now a missionary in Belgium, Paul Brazle said that a key focus of his father’s ministry was “making opportunities available for young guys to be in ministry and get a sense of what it was like.”
While in Canada, Clinton Brazle lost his wife to multiple sclerosis in January 1972. He later married Delma Butrum, a dorm mother at Abilene Christian University in Abilene, Texas. The couple worked in Canada, Boston and Oklahoma before returning to Bozeman in 1990.

A FAITH THAT CAN’T BE TIPPED
Clinton still speaks in his former pulpit when asked. He also visits elderly members of the church where he began his ministry and serves as an elder.
At age 83, Brazle plans to spend the rest of his days in Bozeman working on his stamp collection, praying, reading and serving wherever he can. Fellow members describe Brazle as a man of strong faith with a devoted prayer life.
“Faith with Clinton is kind of like the keel on a boat, and his keel is really deep. I just don’t think you could tip him over,” said Mike Tess, a Bozeman elder and longtime friend. “His first response, if any sort of problem arises … is, ‘We should pray about it.'”