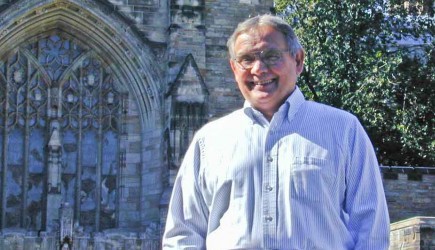 Staff Reports
NEW HAVEN, Conn. — Abraham Malherbe, professor emeritus of New Testament criticism and interpretation at Yale Divinity School, died from an apparent heart attack Sept. 28. He was 82.
Malherbe, an internationally known Bible scholar, was born in South Africa and was converted to Christianity by missionary Eldred Echols. Echols encouraged Malherbe to attend Abilene Christian University in Texas. After graduation there, Malherbe studied at Harvard University and returned to teach at ACU from 1963 to 1969.
“Abe trained a generation of New Testament professors in the Churches of Christ who now populate the Christian college faculties and beyond,” said Ken Cukrowski, associate provost and interim dean of ACU’s College of Biblical Studies.
Malherbe and his wife, Phyllis, who made their home in Hamden, Conn., dedicated a great deal of time and resources to support the Whitney Avenue Church of Christ in North Haven, Conn., as well as a number of other churches in the area, according to a Yale news release. In recent years, the Malherbes attended the First Baptist Church, the release said.
“Abe Malherbe was the embodiment of an ancient ideal, the Christian scholar,” said David Bartlett, a Yale Divinity School professor emeritus of Christian communication. “His scholarship is known by everyone who studies New Testament, as he helped bring early Christian literature into conversation with the Hellenistic philosophical writings and helped us to think about the church in its social and intellectual context.”
In a 2002 interview with The Christian Chronicle, Malherbe expressed concern about Churches of Christ “cozying up to those evangelicals who put a premium on feeling at the expense of reason.”
“It seems that the goal of many services is to achieve an emotional response without imparting biblical knowledge,” he said. “When the same, non-expository approach is followed in a church’s Bible classes, any Restorationist nuance easily disappears.”
Read a full obituary.