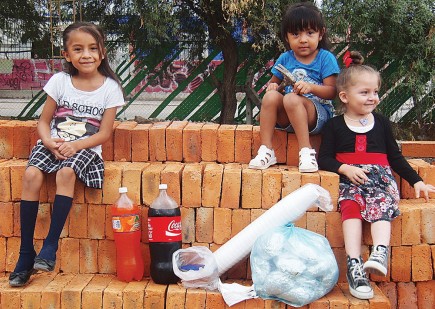 Around the World, September 2013

Staff Reports
BRAZIL
CAMPO GRANDE — Twelve university-age students learned about church missions from Bryan Gibbs, director of Brazilian team and church development for Texas-based Great Cities Missions.
“These young people study theology every morning,” said Gibbs, who taught the students at the SerCris School of Theological Training. “Every evening they work toward their bachelor’s degrees at local universities in fields as varied as education, business administration and law.”
Gibbs prays that the students will soon serve as vocational missionaries.
CHINA
PINGGUO COUNTY — Julie Jansen doesn’t speak Chinese, but she learned that “the sound of laughter is universal” on a recent mission trip to a children’s home in China’s southern Guangxi region.
Jansen was one of 19 members of the Buford Church of Christ in Georgia who visited two children’s homes in the region, supported by the Chinese Agape Foundation.
For two weeks, the church members played, joked, ran, cried, hiked, sang and worshiped alongside the children, said Brandon Edwards, the church’s youth minister.

Ben Burnette played basketball and rode skateboards with the children.
“It is amazing how optimistic they were in their circumstances,” he said, “and it’s a great testament to the hands of God at work in the world.”
Edwards added, “The journey toward serving God may be long and hard. It may be uphill, across the world or even life-threatening.
“When Jesus said to his disciples, ‘Follow me,’ he meant it. And I am so proud of the Buford church family as they did exactly that.”
CROATIA

ZAGREB — Church members celebrated Croatia’s entry as the 28th member of the European Union by giving free a cappella performances and distributing new editions of the modern Croatian language version of the New Testament.
Meanwhile, more than 80  children from Zagreb participated in Champs Camp, a Bible-based youth retreat led this year by church workers Steve Taliafero and Mislav Ilic.
FRANCE
LYON — About 150 members of Churches of Christ in France, Belgium and Switzerland attended an annual retreat in the mountains of Central France, about two hours from Lyon.
Speakers included Lyon missionary Arlin Hendrix and Steve Allison and David McAnulty, psychology professors at Abilene Christian University in Texas.
HAITI
PIGNON — A “chain reaction” of baptisms has swept across this small town in central Haiti in recent months, said Clifford Yeldell, a church member in Cedar Hill, Texas. For about a year, Yeldell had taught Bible to students in Pignon using a computer program.
Three students were baptized, with assistance from Manius Vixamar, a minister in Haiti’s capital, Port-au-Prince. Yeldell traveled to Haiti in February to work with the new converts.
During the trip, the mayor of Pignon invited him and Vixamar to the town, where they preached to 400 people.
In the months since, nearly 30 people have been baptized — including the mayor.
Experienced Christians are needed to help train these new converts, Yeldell said.
NORWAY
SANDNES — Christians in this Scandinavian nation — home to a handful of Churches of Christ — are praying twice per day for 30 days, said church member Colin Beharie.
During the “30 Days of Prayer,” Christians are “asking God to open doors for the Gospel in Norway, to provide more workers to enter the field and to bless and strengthen the Christians in the country,” Beharie said. He asked participants to read and meditate on Jesus’ teachings about prayer in Luke 11:1-13.
SWITZERLAND
GENEVA — Robert McCready, associate professor of foreign language and international studies at Harding University in Searcy, Ark., led a team of 10 Christian students on a two-week summer program.
The students learned about evangelism in Europe’s French-speaking regions from local missionaries.