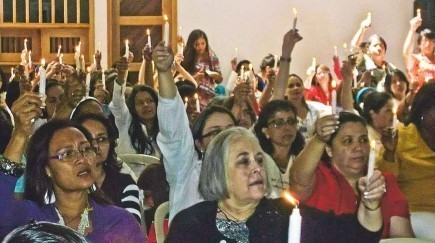 Around the World, October 2012

STAFF REPORTS
CAYMAN ISLANDS
GEORGE TOWN — Three Churches of Christ in this Caribbean territory of Great Britain, west of Jamaica, hosted the 42nd Caribbean Lectures. Attendees came from congregations across the region, including 40 church members from the Bahamas, said missionary David Caskey.
“The most impressive thing to me is that, 42 years ago, the audience was 95 percent Americans,” Caskey said. “This year I noted that perhaps the Americans made up 3 percent of the brethren, with almost every Caribbean nation represented.”
GREECE
KECHRIES — The apostle Paul got a haircut in this ancient Corinthian port, once known as Cenchrea. (See Acts 18:18.)
Nearly 2,000 years later, 72 adults and 23 children gathered here for the eighth annual family retreat of the Omonia Church of Christ in Athens.
Participants represented nine nationalities — Greek, Bulgarian, Filipino, Moldovan, Nigerian, Romanian, Russian, Ukrainian and American.
Attending this year’s retreat was a struggle for many because of Greece’s ongoing financial woes, organizers said.
HAITI
LILAVOIS — A children’s home in this community, near Port-au-Prince, provides shelter and food to about 90 children.
They once lived in “the poorest of poor conditions,” with little clothing, dirty water and no plumbing,  but their situation is improving, said Joe Holley, thanks to donations from Christians and aid from Healing Hands International, a church-supported relief ministry.
Holley led a team of five men from the East Colbert Church of Christ in Muscle Shoals, Ala., to Haiti. Alongside Haitian workers, the men constructed a pavilion at the Lilavois Children’s Home. About 140 people worshiped under the pavilion, Holley said. The Alabama church seeks additional partners for Haiti work.
MEXICO
TOLUCA — “Most churches in Mexico have more women members than men,” said Denise Galindo. Women are “a vital part of the church body, yet they are rarely ministered to.”
Galindo set out to change that during a recent trip to Toluca, a suburb of Mexico City where she and her husband, Barry, served on a church-planting team more than a decade ago.
Galindo and fellow church members taught Mexican women fun, educational activities for children using household items. They also taught the women to crochet rugs and hot pads using old sheets and cloth, how to make no-sew fleece blankets and pillows.
The women conducted the seminars in Toluca and two towns with recent church plants — Zictapec and San Pedro Cholula. In the latter, 44 women attended, only six of whom were church members, Denise Galindo said.
NAMIBIA
OVAMBOLAND — A “true restoration movement” is taking place among the indigenous people of this region in northern Namibia, says Roger Dickson.
Dickson is coordinator of Africa International Missions, a Cape Town, South Africa-based ministry that produces literature and conducts seminars on Bible-based Christianity.
Dickson, along with coworkers Malvin and Hazel Kivedo and Denville Willie, traveled 4,000 miles north from Cape Town at the invitation of religious leaders among the Ovambo people.
About 150 preachers attended six seminars conducted by the team. Malvin Kivedo presented the preachers with “The Teacher’s Bible” and “A Call to Restoration.”
OMAN
MUSCAT — Edward Rouse, a minister in India, traveled to this Muslim-dominated, Middle Eastern sultanate on the Arabian Peninsula, bordering Yemen and Saudi Arabia.
An evangelist working with a church of expatriates in the capital, Muscat, invited Rouse to speak to his congregation.
“It really surprised me to see more than 250 Telegu (an Indian language) people gathering at one place for worship,” Rouse said.
The minister was invited to return and asked for prayers for the Muscat church.