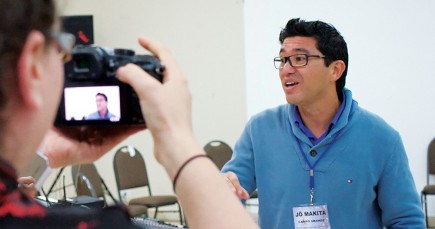 Staff Reports
BELIZE
COROZAL — Luis Pedraza recently completed a missionary journey from his home in Santa Clara, Cuba, to the northern tip of the Central American nation of Belize.
Pedraza, outgoing director of the Jamaica School of Preaching’s extension program in Cuba, visited Churches of Christ and explored the possibility of planting a satellite program for the Kingston, Jamaica-based school. The effort is part of the school’s Caribbean Basin Initiative for Christ, designed to reach French- and Spanish-speaking parts of the Caribbean.
The people of Belize speak a mix of Spanish and English. So does Pedraza, who said he was inspired by the trip.
“Being here, we can reach not only Belize and southern Mexico but also, as a second step, Guatemala,” he said.
CAMEROON
BUEA — Forju Mary Forbin, a Cameroonian Christian who studied at Oklahoma Christian University in Oklahoma City before returning to her native country, established a private Christian boarding school, Baird Memorial College. The school is now in its ninth year and has more than 150 students from grades six to 12.
In September, a sixth building, a girl’s dormitory, will be opened and named in honor of Barbara Kee, a mentor and former missionary to Cameroon.
GERMANY
GEMUNDEN — Patrick Boyns, principal of the British Bible School in Corby, England, popped “across the Channel” to present a series of lessons at the Spring European Singles Retreat in this German hamlet near Frankfurt.
“It is quite clearly made known that it is not in any way intended to be an event designed to end the state of singleness,” Boyns said, “but rather one at which those unattached can find encouragement and draw strength from others who experience the same challenges and blessings of being single.
“And I can now, once more, speak from personal experience.”
Boyns’ wife, June, died in 2011 from complications due to a rare, chronic illness that she battled for years.
“I have certainly come to learn, and in part rediscover, what it is to be single in a world of couples,” Boyns said, adding that he enjoyed being a part of the retreat, which brought together about 20 Christians from at least six countries.
“We enjoyed being there, spent useful time in the Word,” he said, “shared pleasant meals and thanked God for his goodness.”
MEXICO
ANAHUAC — Members of the West Houston Church of Christ in Texas and a community church in Denver traveled to this city in Mexico’s Chihuahua state, about 300 miles south of El Paso, Texas, to work and play with children at Casa de la Esperanza. The team delivered food to the hungry and sorted a closed shoe store’s inventory — purchased by Casa administrator Gil Sanchez — for distribution to kids at the children’s home and people in need. The group gave 13 used laptop computers to Casa.
“As they get closer to their goal of opening an on-campus Christian school in the fall of 2015, laptops and equipment of that nature will be crucial to success,” said Lyn Rudel, a member of the West Houston Church of Christ in Texas.
PARAGUAY
ASUNCION — Christians in this South American nation are learning to teach and preach in their native tongues — Spanish and Guarani, an indigenous dialect.
The Asuncion Bible Academy began training its first five students recently, under the direction of Troy Spradlin, a missionary in Paraguay since 2010. The academy, designed to train Paraguayan ministers in their own cultural context, is an extension school of the Bear Valley Bible Institute in Denver.
SOUTH AFRICA
BENONI — How do you buy shoes for needy children who don’t know their shoe size?
The youth group at the Benoni Church of Christ devised a clever work-around for children in the Zenzele squatter camp near their community. The youths had the children stand on a piece of cardboard and traced outlines of their feet.
They wrote each child’s age and clothing size on the footprints and asked church members to purchase shoes and winter clothes for them. (In South Africa, winter months are June through September.)
“For our Benoni youth group to do this on their own, we feel this shows initiative on their part to think of others who may not stay warm at this time of year,” said missionary Ann Hogg.