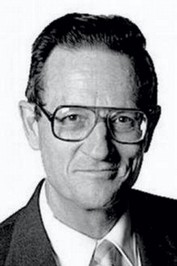 Arlie was born March 14, 1936, in Slaton, Texas. He was the son of A.J. and Ruth Clem Hoover. Arlie was the middle child of five. His parents and two older siblings — brother Bobby Hoover and sister Myrna Brown — preceded him in death.
Arlie is survived by his wife of 55 years, Gloria Garrison Hoover; two daughters, Catherine and husband John Wilder of Lakeland, Florida, and Arletta and husband Wes Beard of Deer Park, Texas; two brothers, Nat Hoover of Ingleside, Texas, and Tim Hoover of Parker, Texas; and four grandsons, Sterling Smithson, Jordan Smithson, Andrew Beard and Ian Beard.
Arlie graduated from Slaton High School in 1954. He attended Florida Christian College, the University of Tampa and the University of Texas, attaining his doctorate in history in 1964. He was a Fulbright Scholar in West Berlin, Germany, in 1963-1964. He taught history, logic and Christian apologetics at Pepperdine University in California from 1964-1977, at Columbia Christian College in Oregon from 1977-1980 and at Abilene Christian University in Texas from 1980-2010.
Arlie was an accomplished and well-respected teacher, speaker and writer on both Christian and historical topics. He authored 12 books, numerous academic publications and magazine articles, and he received several awards of academic distinction from both historical and Christian institutions.
Arlie used his gifts in God’s Kingdom as a preacher for congregations in Florida, Texas, California and Oregon, serving as a deacon at the Hillcrest Church of Christ in Abilene, teaching summer Bible classes for European Christian College and for many others too numerous to mention. Arlie was an accomplished traveler. He spent time in Europe conducting research and teaching at extension campuses in Heidelberg, Germany, and Oxford, England. He was very proud of having taken all four of his grandsons on trips to visit historically significant places in Europe — especially Great Britain.
Arlie will be missed for his humor, intellect, appreciation of music, enjoyment of life, dedication to his family and his coffee.
The family has requested that in lieu of flowers, donations may be made to The Jesus Film project, www.jesusfilmhd.com.