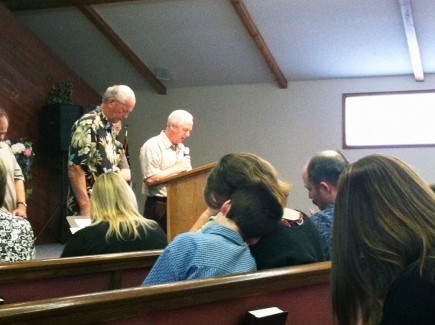 After theater massacre, Colorado church turns to God for strength

Sarah Jane Kyle
AURORA, Colo. — Larry Wishard stepped to the front of the Southeast Church of Christ, a touch of weariness hidden behind his ever-cheerful disposition.
His head dipped, and his fingers wrapped around the edges of the wooden pulpit from which he’s preached for 30 years. He looked out at a congregation that, while shaken, stood resilient in the face of a movie-theater massacre that traumatized this Denver-area city — and the nation.
In the pews was Debora Marcoux, a longtime church member who had received a terrifying call just two days before.
Her niece Kirstin Davis, 21, who had lived with Marcoux for more than a year, had been in the theater when a gunman opened fire Friday during a midnight premiere of “The Dark Knight Rises.”
“When I picked her up, she had blood all over her,” Marcoux said of Davis, who left the theater physically unscathed but emotionally shattered.
Davis’ boyfriend, Eugene, suffered a bullet wound but survived.
“I wanted to get her away from the confusion so she could cry,” the church member said of her niece, whom she considers more like a daughter. “She was trying to be strong for everyone. … She’ll make it through. She’s a strong Christian, and I’m proud of her.”
While Marcoux is confident in her niece’s faith, she worries that other young people who were in the theater will begin to waver after witnessing such tragedy firsthand.
“Pray for all of those kids to continue on with their lives,” she said. “I’m scared they’re going to be so withdrawn that they don’t want to continue their service with the Lord.”
A LIGHT IN THE DARKNESS
Early Friday, a gunman opened fire on moviegoers at Century 16 Theaters in Aurora, killing 12 and injuring at least 58 who had entered the theater for a night of fun but left with terror.
Just hours after gunshots shattered his city, Wishard began grieving alongside victims and their families.
He serves with the Key Community Response Team, a collaboration of city officials, ministers and police and fire department officers who respond to tragedy and become the “eyes and ears” of the community in times of trouble.
At the Medical Center of Aurora, the Southeast Church of Christ minister reached out as small clusters of people waited in an eerie calm to learn the fate of loved ones. He prayed over teens who lost one of their own. (Read his first-person account of the emotional day of the shooting.)
“In those hours, I had seen my town blown apart by this murderer,” Wishard said. “I had seen a diverse group of people come together to help each other.
“Which church one attended didn’t matter. One’s skin color didn’t matter. One’s socioeconomic group didn’t matter. What mattered was helping everyone get through.”
He later learned that just up the street from his home, the family of victim Alex Sullivan, who had gone to the theater to celebrate his 27th birthday and upcoming wedding anniversary, mourned the loss of their son.
Culminating a weekend of tragedy, Wishard and the church took a reprieve from the mourning Sunday to “focus on the good that God has given us.”
THE JOY OF THE LORD
After praying solemnly for each victim — and for suspect James Holmes, whom police apprehended outside the cinema — the congregation chose to focus not only on the tragedy but on the blessing of new life.
“Our service today isn’t going to be a memorial service,” said worship leader Jason Benoit. “It’s going to celebrate the good things we have in Christ.”
Wishard called it “Christmas in July.”
Amid a chorus of “Hark the Herald Angels Sing” and “Joy to the World,” smiles broke through tears and weary expressions, showing that even in the midst of tragedy, the good news of Christ’s birth can bring joy.
“There is nothing more healing for us than to worship,” Wishard said. “I don’t believe there’s anything greater than praising God. … Some may ask, ‘How in the world do you have joy in a week likes this?’ It’s because this world is not our home.”
Even in the joy of the good news, he knows his congregation and community must grieve the 12 lives lost and countless others affected by that night’s events.
“When God saw so many things in this world, he grieved,” Wishard said. “We have grieved heavily this week, and I believe God’s grieving with us.”
As Davis and the countless others pick up their lives and learn “how to live again,” Wishard said the Southeast body just wants to show the hurting one thing: God is still good.
“We’re going to be in the middle of this for a long time,” he said. “It’s important that we don’t comfort people with ourselves — we must comfort them with God. God’s word lights our path through the darkest and most horrendous times. It can turn even the most horrific event into an opportunity to share his life.
“Something good can come out of something bad.”
More coverage: From ‘Dark Knight to bright morning: Some ministers revamp sermons in wake of tragedy