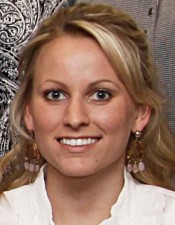 After parents’ divorce, God provided a new family through the church

Amanda Jordan
I am a child of divorce.
Twenty years into my parents’ marriage, everything fell apart — our family, our emotions, our lifestyle. They got divorced, even though they were churchgoers.
I was 7 when it happened in 1996. I didn’t know exactly why Dad moved out, but I knew my family would never be the same. I knew I would always have to feel the hole in my life where my two married parents should have been.
For me, Christmases were separate. I remember packing bags for every-other-weekend trips to Dad’s house. I resented watching other kids my age have both parents in the bleachers at the basketball game or seeing both parents at the dinner table at sleepovers. I felt like I missed out on some of my emotional upbringing because I didn’t have a father at home.
However, the more I’ve thought about it — as I look back on the situation at 21 — I realize that some good accompanied the bad after my parents’ divorce, especially where the church was involved. While the divorce may define a part of me, I believe the rest of me is defined by how those around me treated me after the divorce.
Church members took one of two routes. Some found it appropriate to treat my mother as though she had a disease, sending her cassette tapes about the ugliness of divorce or silently shunning her from family life groups for being single.
Others saw the split as an opportunity to step up for my family. Some members offered to change my mom’s oil. Others, including our preacher, helped my mom find a job. Members called to check up on us, not because they felt like they had to, but because they wanted to. They genuinely cared.
These people became my family, making up for the shortcomings of my split family. They encouraged me to be baptized, to go to church camps and to keep an optimistic outlook amid the pain. They filled the hole I had, taking me under their wings to act as role models. They were positive influences and showed me that, when I became an adult, my family could be different. They gave me a future to look forward to. They showed me what the church and its people should be about and how it should treat its members — divorced or not.
Isn’t that what the church should be about — helping those in need? We are commanded to assist the widows and orphans, but what about those whose families have been destroyed by divorce? What man tears apart, the church should try to repair.
I’m happy that statistics show a decline in the number of divorces in America. The church should do its best to prevent divorce, long before it becomes an issue. And if it’s too late, the church should support those struggling through it. Some churches have taken on the task wholeheartedly, offering premarital counseling to those soon-to-be married and services and counseling to those going through divorce.
Each week, my church hosted divorce recovery programs for children of divorce and adults that had recently undergone a divorce. This program offered me and my mom a chance to escape the emotional aches and to connect with people who felt the same way we did. We were able to go though exercises to work through our feelings and activities to help forget what we were feeling for a time.
These experiences strengthened my faith.
Even though I wasn’t dealt the best earthly father under the best set of circumstances, I learned that an earthly father and an earthly family, while important, can be supplemented by and would always be under the control of the Heavenly Father.
I have firsthand knowledge of what it’s like to be without. And, without that knowledge, I don’t think I could have recognized the plans and provisions God made especially for me.
AMANDA JORDAN is a senior at Oklahoma Christian University in Oklahoma City. A member of the Highland Oaks Church of Christ in Dallas, she served as The Christian Chronicle’s intern during the 2009-2010 school year.