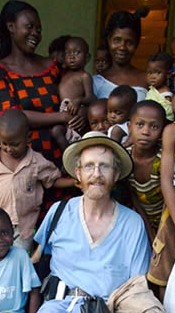 After kidnapping, Christian doctor to receive care for wound in U.S.

Erik Tryggestad
Medical missionary Dr. Robert Whittaker, who spent nearly two days as a hostage of armed kidnappers, will travel from Nigeria to the U.S. for medical treatment after suffering a gunshot wound to his arm during the abduction.
“Bob is resigned to lose (an) arm if God wills,” said Dr. Henry Farrar, Whittaker’s predecessor at Nigerian Christian Hospital, a medical mission supported by Churches of Christ.
Farrar asked Christians to pray for Whittaker and a Nigerian man named America — who was shot multiple times by the kidnappers.
Dr. Brian Camazine, a surgeon from Texas working at Nigerian Christian Hospital, cared for America after the Aug. 2 abduction and Whittaker after the hospital’s staff negotiated for Whittaker’s release Aug. 4.
Camazine will determine when it is safe for Whittaker to travel to Nashville, Tenn., to see orthopedic specialists, Farrar said.
Whittakerhas served for nearly 25 years as a physician for Nigerian ChristianHospital, near the southern Nigerian city of Aba. He was at his home onthe hospital compound with his wife, Annette, and son, Ozioma, when avehicle of armed men pulled up to the compound about 11 p.m.
The kidnappers shot America, one of the compound’s security guards, at least two times and shot Robert Whittaker once in the arm.
Annette Whittaker received minor injuries from shattering tile that was hit by a bullet, said Jerry Canfield, chairman of the board of the International Health Care Foundation, which operates the hospital.
Two U.S. nurses, Ami Sanders and Emily Zubritsky, were working at the hospital on a medical mission and heard the gunshots.
“We were terrified and had no idea what was happening,” Sanders told The Christian Chronicle. “We called Dr. Whittaker’s cell phone. Annette answered the phone and told us that Dr. Whittaker had been kidnapped.”
Immediately after the attack, “the doctors at Nigerian Christian Hospital and the community alike joined together in support of Annette and Ozioma,” said Sanders, who returned to the U.S. along with Zubritsky.
Church members around the globe also showed their support, said Fleta Mooney, of Searcy, Ark.-based International Health Care Foundation.
“We would like to sincerely thank everyone for the many calls and e-mails we have received that show your immeasurable love and concern for the Whittakers,” Mooney said.
The foundation set up a fund to help with the Whittakers’ expenses.
Whittaker went to Nigeria in 1975 after reading an article by Farrar in the church publication Firm Foundation encouraging physicians to spend vacation time at Nigerian Christian Hospital. The West End Church of Christ in Nashville, Tenn., sent Farrar to serve as the first located doctor at the hospital in 1964. The church now supports the Whittakers.
Sanders described Robert Whittaker as “a devoted father, husband and doctor” — a pillar of the hospital and its surrounding community.
“As a dear friend of the Whittaker family told us as we were saying our goodbyes, ‘This will affect us all for a very long time,’” Sanders said.
Contributions for the Whittakers and letters of encouragement may be sent to:
International Health Care Foundation
102 N. Locust,
Searcy, AR 72143
Please note “Whittaker Fund” on checks.
Donate via PayPal at www.ihcf.net