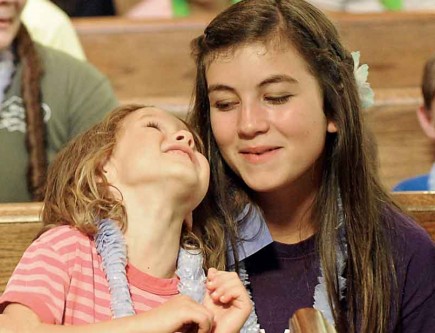 Across the Nation, September 2012

Teens from the Riverchase Church of Christ in Birmingham, Ala., travel north each summer to help the Elkhorn Church of Christ in Wisconsin with VBS. “It is such a win-win situation,” said Jim Frost, an Elkhorn church elder. “It is a mission trip for them and a tremendous boost for our congregation.”
COLORADO
COLORADO SPRINGS — The Eastside Church of Christ launched a relief effort to help victims after wildfires recently destroyed nearly 350 homes in this community.
Mike Baumgartner with Disaster Assistance CoC traveled to Colorado Springs to help with the relief effort, while Churches of Christ Disaster Relief Effort in Nashville, Tenn., sent emergency food and supplies.
The Eastside church is accepting donations by mail at 5905 Flintridge Ave., Colorado Springs, CO 80918. Mark donations for “fire relief.”

GEORGIA
ALBANY — To help keep children and teenagers out of gangs, the River Road Church of Christ invited police to speak during its recent Vacation Bible School.For the third straight year, the church used its VBS not only to teach the way of the Lord but also to tout the importance of being a responsible citizen, television station WALB reported.

TULSA — The recent National Deaf Christian Workshop — hosted by the Park Plaza Church of Christ — drew more than 150 people, most of them deaf or hard of hearing.

Mitch Wilburn, Park Plaza’s preaching minister, told the Tulsa World the church has had a ministry to the deaf for about 15 years.

About five years ago, that ministry “took off,” he said, and Carl Moore was hired to be minister of the
deaf congregation. The deaf church meets Sundays in its own auditorium in a separate building.

CORDOVA — Stan Bronson, 84, who attends the Highland Church of Christ, is a fixture on the University of Memphis campus and at Tiger sporting events.

Bronson, mentally challenged from a trauma at birth, has been the school’s batboy since 1958, a streak that has him in the Guinness Book of World Records as “Most Durable Batboy.”

A recent celebration of Bronson’s birthday doubled as a fundraising campaign for his medical expenses, The Commercial Appeal reported.

Members of his home congregation attended.

Manuel, who moved to Palestine in 1972, has conducted more than 400 gospel meetings since he began his ministry in 1965.

He moderates “Give Me The Bible,” a weekly television program on NBC’s Tyler affiliate, and does a weekly commentary thought on the station called “Something To Think About.”

He also produces a local country revue called “The Dogwood Jamboree,” a classic country music show in the style of Branson, Mo.

The team conducted worship services, worked in shelters and canvassed the area for the church, Holgate minister James A. Maxwell said.

A Churches That Work feature on the Holgate church, published last year by The Christian Chronicle, inspired the trip.