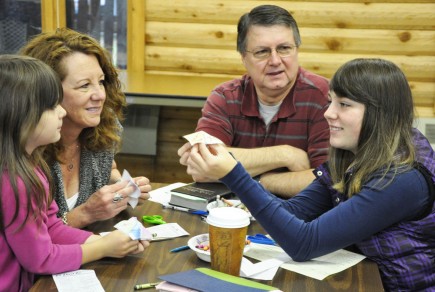 Across the Nation, November 2011

From Staff Reports
MICHIGAN WHITE PIGEON — Family and friends of U.S. Army 1st Lt. Jonathan Edds recently gathered in his hometown of White Pigeon to commemorate his life.
Edds, 24, was killed in Iraq on Aug. 17, 2007. He attended the U.S. Military Academy in West Point, N.Y., and was an active member of the West Point Church of Christ. Edds’ father, Barry, is minister for the White Pigeon Church of Christ.
In White Pigeon, about 160 people participated in the second annual 5K Walk and Run in support of the Edds Memorial Fund. Later, members of the community dedicated a 12-by-18-foot flag in Jonathan Edds’ memory.
MISSOURI SENATH — The case of 3-year-old murder victim BreeAnn Rodriguez has made national headlines.
Hundreds attended a recent funeral for the slain girl at the Senath Church of Christ.
“The Rodriguez family did not attend here, but most of the members knew her and her family,” minister
Jody McFadden said. “Several were her neighbors and saw and spoke to her and her family on a regular basis. We opened our building to them as a community service.”
The service drew a standing-room-only crowd of more than 700.
NORTH DAKOTA MINOT — Volunteers from Florida-based Churches of Christ Disaster Response Team are helping church members clean up and repair flooded homes.
While flood-stricken North Dakota has disappeared from the headlines, the community’s needs remain immense, said Daniel Kelly, minister for the Minot Church of Christ.
The homes of six families in the 60-member congregation sustained flood damage, Kelly said.
Earlier, Tennessee-based Churches of Christ Disaster Relief Effort sent a tractor-trailer load full of emergency food and supplies to help victims.
TENNESSEE SPRING HILL — Inspired by a presentation he heard at Freed-Hardeman University’s “GO! Camp,” Logan Campbell organized a youth group trip to help the Global Soap Project in Atlanta.
Through the project, Derreck Kayongo, a refugee from Uganda, has a warehouse where soap thrown away by the hotel industry is sanitized, ground into flakes, melted with heat and reformed into bars cut to hand size.
The recycled soap helps improve hygiene in needy countries around the world.
About 30 young people and sponsors from the Spring Meadows Church of Christ volunteered at the warehouse, said Tom Campbell, Logan’s father.
UTAH RENO — A Nevada National Guard member wounded in a shooting rampage at an IHOP restaurant regularly attends the Foothills Church of Christ.
Gary Cage, minister of the 125-member congregation, said Sgt. Caitlin Kelley is a friend of church members and has been studying the Bible with them.
“She’s very interested in the Gospel,” Cage said of Kelley, who was shot in the foot during the IHOP attack.
In the wake of the shooting, the minister said, “The main thing we’re doing is serving her and seeing about her needs and spending a lot of time with her. It’s very traumatic.”
Guard leaders have characterized Kelley’s response to the shooting as heroic. In all, 11 people were shot and four killed in the Sept. 6 attack.
VERMONT SPRINGFIELD — The Springfield Church of Christ in Vermont helped flood victims in nearby towns after Hurricane Irene.
Elder Ernest “Puggy” Lamphere said the 80-member church received a truckload of emergency food boxes, personal care kits and cleaning supplies from Tennessee-based Churches of Christ Disaster Relief Effort.
Church volunteers used all-terrain vehicles to deliver supplies to some victims.
“It’s a great effort and a great outreach for the church,” Lamphere said, “and God gets the glory, not us.”