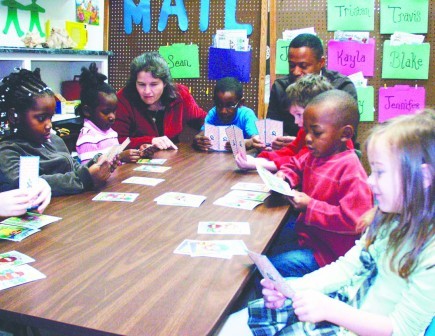 From Staff Reports
ARIZONA GOLD CANYON — That old firehouse just behind the car wash on Kings Ranch Road?
It has a new use: church building.
The Gold Canyon Church of Christ had met in an elementary school and later a preschool academy before signing a three-year lease on the firehouse with an option to buy, member Bob Jones said.
Members donated sweat to renovate the firehouse, removing walls, painting, cleaning, pruning and trimming bushes.
“Where firemen once slept are now classrooms, meeting rooms, an office and a children’s ministry,” Jones said. “And the kitchen becomes, well, a kitchen. After all, churches do need fellowships and potlucks.”
ILLINOIS JOLIET — For Amber Holup, giving  of time and money is a lifestyle.
“I’ve been involved with the church serving the homeless. I’ve cleaned parks. And recently we made dresses out of pillowcases to give to girls in Africa,” said the 12-year-old, who attends the Cherry Hill Church of Christ.
Amber organized a special project to benefit Shults-Lewis Child and Family Services in Valparaiso, Ill. She sold homemade pumpkin bread and raised $150.
“This goes to show that you do not have to be an adult to help others,” said her mother, April Holup.
MISSISSIPPI COLUMBIA — Jimmy Cox, 82, a Church of Christ preacher, and his wife, Shirley, 61, died in a Jan. 10 house fire, Brotherhood News reported.
A one-time newspaper man, Cox had spent the last several years trying to keep a small congregation going.
His first wife, Mattie, had died in 2004. They had three children, daughters Llene Poles and Nancy Tolbert, both of Mobile, Ala., and a deceased son, Jimmy Cox Jr. Nancy Tolbert is church secretary at the Regency Church of Christ in Mobile, and Regency minister Allen Eldridge conducted Cox’s service.

TENNESSEE KNOXVILLE — Teresa Heinz, a member of the Arlington Church of Christ, started a project that donates socks to the Knoxville Area Rescue Mission.
The project is in memory of her son, Zack, who died in a 2007 car accident.
Heinz recalled that her son had at times donated socks to the homeless and helped the rescue mission.
“After he died I tried to think of something that could be done in his memory,” Heinz told the Knoxville News Sentinel. “It just hit me that it would be kind of neat to take socks” to the rescue mission.
She collects socks year-round.

TEXAS CHILDRESS — An “Extreme Home Makeover” occurred as Childress Church of Christ members bought a dilapidated house, gutted it and restored it into a beautiful home.
The home then was given to a needy woman, minister Trey Morgan said.
“Our thinking was, if we can build houses in Honduras every summer, why can’t we build one at home?” Morgan said. The project took four months and involved most of the community, he said.
To see pictures, search for “Augment Project” at treymorgan.net.

KELLER — The Heritage Church of Christ recently honored David Rogers for 44 years of service on the
congregation’s ministerial staff. He led worship at both services that Sunday.Rogers retired Dec. 31. During his tenure, the church had three names and met at four locations.
Formerly the Midtown Church of Christ in Fort Worth, the congregation moved north to this growing suburb in 2001. Rogers and his wife, Nancy, will remain members of the Heritage church.