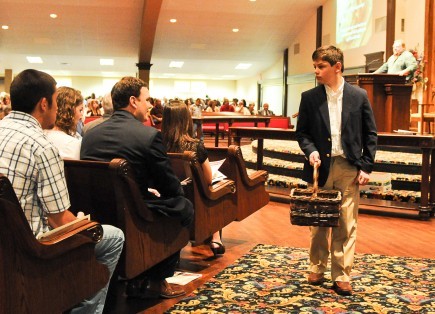 FROM STAFF REPORTS
ALABAMA MADISON — The Women of the Cloth get together at the Monrovia church each Tuesday to make things for people in need.
Recently, they made teddy bears for local ambulances, The Huntsville Times reported.
The hand-sewn bears are carried on ambulances and given out when first responders answer a call involving a child.
“I enjoy sewing and knowing it gives someone else joy,” member Cynthia Noles told the newspaper.

MICHIGAN LANSING — More than 300 people attended the recent Michigan Christian Convention — about 50 to 60 of them from a cappella churches, said Al
Meakes, outreach and involvement minister at the Plymouth Church of Christ.
Meakes, a minister in Michigan for 20 years, described the gathering as “the most unified, yet diverse, meeting of brothers and sisters in Christ that I have witnessed in our state.”
WALLED LAKE — Fifty-two teams from 15 congregations competed in the recent Great Lakes Bible Bowl 2010, sponsored by the Walled Lake church.
The Rochester church in Rochester Hills and the Gateway church in Southgate hosted regional competitions as participants tested their knowledge of the books of Esther and Daniel.
First-place winners at the state level were the North Warren church in Warren in the primary division, the Walled Lake church in the junior division and the Northwest church in Detroit in the senior division.

OKLAHOMA DEL CITY — Fellow church members rallied to help after a May 10 tornado destroyed Chris and Shelly Stephens’ mobile home.
The Stephenses are members of the Del City church, where Shelly serves as children’s minister.
The couple and their two daughters had heeded storm warnings and taken shelter elsewhere.
“They have most of their clothing, plenty of boxes and helpers,” youth minister Jerred England said as he joined other church volunteers in cleaning up debris.

PENNSYLVANIA SOMERSET — The Somerset church is celebrating its 100th anniversary in 2010.
At its birthday, the rural congregation is experiencing a spike in attendance, especially among people ages 30 and younger, minister Jimmy Hinton said.
“We are averaging 80 to 85 in attendance, which may not sound like many,” Hinton said. “But in a small town, God continues to bless an old church.”
TENNESSEE HENDERSONVILLE — The Hendersonville church is sponsoring a full-time “traveling evangelist.”
With Bible and car keys in hand, Keith Parker — who spent 16 years as the congregation’s pulpit minister — is open to traveling anywhere in the United States to share the Gospel.
In the ministry’s first year, God blessed it with 57 baptisms and 472 prayer requests, mission committee chairman Jim Weiss said.
“Across our country, cities and towns still crave the Gospel of Christ,” Weiss said.
For information on scheduling Parker, call (615) 824-6622.
TEXAS ABILENE — The 2,000-member Highland church — one of the nation’s largest Churches of Christ — has chosen a successor to Mike Cope, the preaching minister for 18 years.
Jonathan Storment, associate preaching minister at the Richland Hills church in North Richland Hills, Texas, near Fort Worth, will start his new duties at Highland in August.
Cope announced his departure last year to join Heartbeat Ministries, founded by longtime friend Landon Saunders.
MARBLE FALLS — The first Texas Bible Bowl drew 150 participants, including adult volunteers, to the Marble Falls church, said Paul Hendrickson, preaching minister at the Hawley church.
The Magnolia church and the Lake Houston church in Humble started the Bible bowl, which organizers hope to make an annual event, Hendrickson said.
WEST VIRGINIA CHARLESTON — If all goes as planned, this item will be a surprise to Jerry Alderson, minister of the Park Avenue church.
In June, Alderson marked 40 years with the congregation — a milestone that his wife, Sandra, wanted to recognize.
A 1963 graduate of Lipscomb University in Nashville, Tenn., and a 1970 graduate of Harding University Graduate School of Religion in Memphis, Tenn., Alderson also serves as a Park Avenue elder.
“We both feel most blessed to have worked among the Park Avenue people for so long,” Sandra Alderson said. “They are really a unique group of Christians, willing to do whatever you ask.”