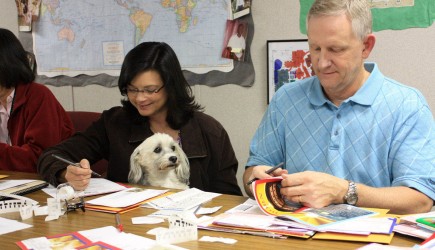 Across the nation, January 2011

FROM STAFF REPORTS
ALABAMA SHEFFIELD — A retired couple on their way to the Wednesday night service at the Cox Boulevard Church of Christ were killed Nov. 17 when a car slammed into the rear of their vehicle, The Daily Times reported.
A Bible was found in the front seat of Foy and Julia Counts’ mangled vehicle, an emergency worker said.
“They were a very happy couple together,” a relative, Sandra Terry, told WAAY-TV. “They worked together on their home and their farm. They were very hard working people. They were loved far and wide in the community and their church.”
FLORIDA OCALA — The Maricamp Road Church of Christ served 240 meals and gave away 30 blankets, 22 sleeping bags and three racks of clothes — including hats and jackets — during a recent “Thanksgiving on the Square” event.
The event provided food and clothing for the area’s homeless population, followed by worship and prayer, church member and organizer Jacob Medley said.
GEORGIA FAYETTEVILLE — Precinct 14 voters, who cast ballots at the Fayetteville Church of Christ, were greeted with sweet smells coming from the church kitchen.
Election Day workers were surprised with coffee and cinnamon rolls for breakfast as well as soups and salad for lunch and dinner, The Citizen reported.
The congregation’s Ladybugs (Ladies Better Understanding God through Service) fixed and served meals for the election workers.
IDAHO MERIDIAN — The Linder Road Church of Christ recently hosted its ninth annual Spiritual Growth Lectureship.
About 330 Christians from 11 states came together for four days of lessons on “The Nature of God,” Rocky Mountain Christian reported.
MISSOURI SPRINGFIELD — A local television station featured the Brookline Church of Christ in its “Pathways of Prayer” series.
The series by KSPR seeks to examine the most basic element of most faiths.
“I pray all day long informally, about different things,” member Dirk Heston said on the recent broadcast. “It doesn’t matter what I’m doing or where I am at. It’s just an ongoing conversation with God the father.”
NORTH CAROLINA CHARLOTTE — The Providence Road Church of Christ recently hosted a “Give Thanks” dinner for foster children and their foster and birth families.
“This is our third year hosting the event,” church staff member Kourtney Sells said. “We cook a Thanksgiving feast for all families. Games and other fun events are provided for the children and their families.”
RALEIGH — The Brooks Avenue Church of Christ recently honored two leading North Carolina ministries.
Carolina Bible Camp and Retreat Center was recognized for its service and support to thousands of young people throughout the state.
Agape of North Carolina, which provides services in birth parent counseling, general counseling and adoption and foster care, was praised for its work with hurting families.
PENNSYLVANIA SOMERSET — As part of its recent 100th anniversary celebration, the Somerset Church of Christ discovered a 97-year-old letter from Daniel Sommer, a key figure in the Restoration Movement.
The correspondence was written on the letterhead of the Octographic Review, the newspaper that Sommer bought after the death of his mentor, Benjamin Franklin, thought to be a descendant of the Revolutionary War patriot’s family.
“After digging into our records, I discovered that Daniel Sommer came to Somerset to preach the first sermons when our building was opened Sunday, Dec. 3, 1916,” minister Jimmy Hinton said.
TEXAS PHARR — A new mobile dental clinic established by the Church of Christ North offers free dental care to needy Texans.
Projects coordinator Randy Adcock recently completed the construction and equipping of the clinic.
In the clinic’s first use, dentist Wilson Howell treated 29 patients from the community surrounding the Spanish-speaking Iowa Road Church of Christ. Howell is a member of the McDermott Road Church of Christ in Plano, Texas.
Health professionals interested in donating their time and skills should contact Craig Cooper at (956) 495-9876.