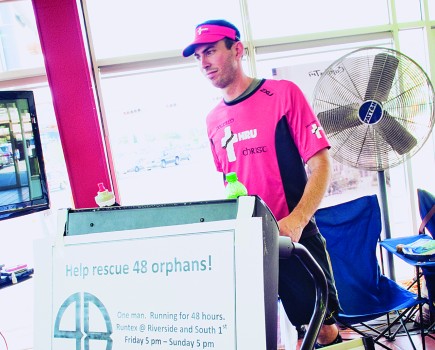 Across the Nation, February 2013

Staff Reports
ALABAMA
ROGERSVILLE — The Southside Church of Christ is mourning the stabbing death of Sharon Wellington, a 32-year-old church member described as a “dear and faithful sister.”
Wellington was found dead in her apartment Nov. 30. Police had made no arrests by press time.
“Sister Sharon’s presence and passion for God will be greatly missed by all of us,” church leaders said in a post on the congregation’s Facebook page. “We know that God is willing and able to see us through this very trying time.”
Read tributes.

ALASKA
JUNEAU — A combined group from two Alaska congregations — the Juneau Church of Christ and the Valley Church of Christ in Wasilla — made an eight-day mission trip to Leon, Mexico.
Many of the young people on the trip had never traveled outside the United States, except to Canada, and had their eyes opened to life in a different culture, church member Pete Baker said.
“Working in a children’s home and two low-income housing projects allowed them to see that young people living in poverty are able to live without the things most American youth acquire or desire,” Baker said.
CALIFORNIA
SAN DIEGO — Rejoice!
That’s the name of an a cappella trio comprised of members of Churches of Christ and invited to sing at the White House during the holidays.
Lisa Caswell and Katha Winter, members of the Canyon View Church of Christ, and Patty Alley, a member of the Lakeside Church of Christ, sang Christmas carols and holiday favorites before the national tree lighting ceremony.
INDIANA
COVINGTON — Fourteen new souls were added to the church as the result of a recent We Care Ministries campaign.
The baptisms increased the size of the Orchard Hills Church of Christ to 49 members, up from 35, elder Ray Nasser said.
“Our flock was increased by 40 percent,” Nasser said. “Each has a mentor who continues to teach and work with them.”
The Orchard Hills church seeks a domestic missionary to come work with the congregation. The church can provide a house but can’t afford to pay a salary, Nasser said. Leaders pray that a larger congregation will decide to sponsor the work.

MISSISSIPPI
BATESVILLE — Lula Ford Wallace waited longer than most to accept Christ.
When she was baptized in 2011 at the Norris Road Church of Christ in Memphis, Tenn., Wallace was 108 years old.
“I feel God has kept her around this long for a reason,” her daughter Virginia Mack, a member of the East Frayser Church of Christ in Memphis, told The Christian Chronicle at the time.
The new babe in Christ died Nov. 29 at age 109. Funeral services were conducted in her hometown of Batesville.
To read the full story, go to www.christianchronicle.org/blog and search for “Lula Wallace.”
OREGON
YAMHILL — The annual Expositor’s Seminar has a simple goal: bring first-class teaching of Scripture and methods of preaching to the Pacific Northwest.
“Since its beginning, organizers have conducted the Expositor’s Seminar in the belief that solid biblical preaching and teaching is a foundation for healthy congregations,” said Mark Johnson, minister for the Olympia Church of Christ in Washington state.
Until its closing in 2008, Cascade College directed the seminar. Since then, the seminar has moved to Camp Yamhill with financial  support from the Northwest Endowment Fund.
The next seminar will be Jan. 28-30 and feature speakers Kevin Youngblood and Craig Altrock.
For more information, contact Jay Hawkins at (208) 459-2281 or [email protected] or Johnson at (360) 528-1850 or [email protected]