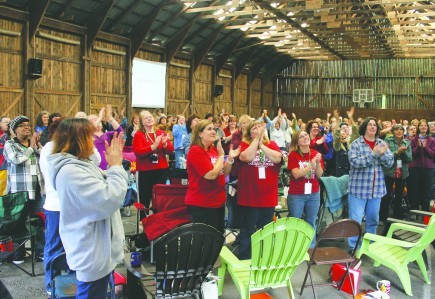 Across the Nation, December 2012

Staff Reports
FLORIDA
HOMESTEAD — Nearly 30 teens and adults from the Lone Oak Church of Christ in Paducah, Ky., recently spent several days working with the Homestead Church of Christ’s Vacation Bible School.
Besides helping with crafts, lessons and snacks for 100-plus children each night, the group volunteered in the community and at Redland Christian Academy, a ministry of the Homestead church.
“We painted, hung new doors in the gym and built new walls,” Lone Oak youth minister Jamey Boone said. “We also did some work for some of the members in their homes and painted a Hispanic church building in Miami.”
For more information on the Florida work, see www.j4lministries.org.
ILLINOIS
SOUTH HOLLAND — Dubbed the Sweet Reeses, a family from the South Holland Church of Christ competed on a recent episode of GSN’s “The American Bible Challenge.”
Derrek and Susan Reese, along with their son, Daniel, 17, played for the charity Created Treasures Performing Arts Academy, which uses the arts to teach and heal. The Reeses flew to Los Angeles on a Wednesday, attended Bible study at the Inglewood Church of Christ and taped the show that Thursday.
“It was so much fun,” Susan Reese said. “The questions are very easy. If you love the Bible, then you read it a lot. Then you know what all these facts are. So it’s an easy game show. But we had a blast.”

INDIANA
BEDFORD — Old-timers received special recognition recently at the Central Church of Christ.
The congregation honored all members 70 and older, giving awards to the oldest member, the oldest married couple and the longest-serving Christian.
Minister Rick Leach asked the entire congregation to hold hands and touch the shoulders of the older members and pray over them, said Laura Leach, Rick’s wife.
“It was truly a blessing to be in a room with so much wisdom,” she said.
LOUISIANA
MONROE — The recent fourth annual Area Wide Worship drew about 300 members from several area Churches of Christ to a high school auditorium.
The Forsythe, University, White’s Ferry Road, Jackson Street and Calhoun congregations participated.
“We look forward to gathering again on the last Sunday night of August 2013 if the Lord delays his return,” said John Dobbs, minister for the Forsythe church.
OREGON
PORTLAND — Agape Blitz — a work program designed to serve the community — started five years ago as a one-day outreach by the Agape Church of Christ.
The program has grown to three full weeks with mission teams from Arkansas, Oklahoma and Washington state helping with the most recent effort.
The mission teams served lunch and repaired bicycles at an apartment complex, fixed playground equipment at a preschool, mowed and pulled weeds at a community garden, painted at a house for sexually exploited girls and washed the feet of homeless people, reported Agape ministry interns Brett and Heather Worsham.

SOUTH DAKOTA
ABERDEEN — Coming soon to a theater near you: a movie about the life of former Lipscomb University basketball coach Don Meyer.
Moonglow Films hopes to start production this year and release the independent film into theaters next year, the Aberdeen News reported recently.
Meyer, a member of the Aberdeen Church of Christ, retired from coaching in 2010 with 923 wins. A 2008 accident required his left leg to be amputated below his knee. After the wreck, doctors discovered cancer in his liver and small intestine.

TENNESSEE
MEMPHIS — About 70 young adults representing 12 Memphis-area congregations participated in a recent “Lost and Found” retreat.
The retreat at a state park was designed to create unity among area congregations and “impact a generation that is leaving the church,” said Justin White, a member of the Park Avenue Church of Christ.
The retreat theme was tied to David Kinnaman’s book “You Lost Me,” in which he describes the problem of young adults leaving their faith. Speakers Garrett Best, Eric Gentry, David Flatt and Smith Hopkins all addressed that issue.
Angela Rusk, who works for a Spanish-speaking congregation that meets in conjunction with the Sycamore View Church of Christ, said the retreat helped her “recharge my batteries.”
TEXAS
ARLINGTON — About 240 people attended the recent inaugural worship assembly of the Arlington Iglesia de Cristo (Church of Christ).
The Hispanic church plant is a cooperative effort of Great Cities Mission and three Arlington congregations: Woodland West Church of Christ, North Davis Church of Christ and Hillcrest Church of Christ.
Two families are planting the congregation in a growing city where 60 percent of students are of Hispanic heritage, missionary Omar Corpus said.
Corpus and his wife, Cesia, are from Mexico, while Jesus Rodriguez and his wife, Carmen, are from Puerto Rico.
The missionaries hope to reach not only new immigrants but also second- and third-generation Hispanic families, Corpus said.