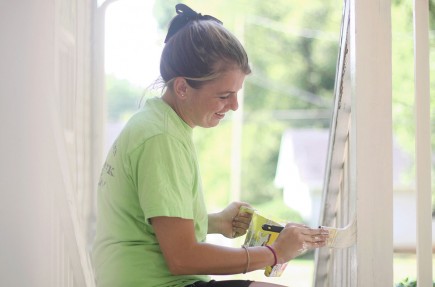 Across the Nation, August 2013

TUBA CITY, Ariz. — After 26 years, Paul Ghee’s mission trip to the Navajo Nation has ended.
The longtime missionary died May 29 after suffering from blood clots and pneumonia. He was 60.
A memorial service was conducted June 8 at the Tuba City Church of Christ.
Ghee and his wife, Ann, moved to Tuba City in October 1987 to work among the the Navajo people.
The Ghees, both from Nashville, Tenn., trained for ministry at the White’s Ferry Road School of Biblical Studies in West Monroe, La. White’s Ferry Road minister Mike Kellett described Paul Ghee as a “great friend and soldier who plowed the hard ground.”
TUCSON — Palo Verde Church of Christ members spent a recent day at Santa Rita Park, a homeless hangout.
“We offered to wash feet, gave a pair of brand-new socks for the clean feet and grilled barbecue chicken for three  hours until we ran out,” pulpit minister Bobby Valentine said.
Valentine praised “all the teens for braving the 93-degree heat and just loving God.”
COLORADO

BOULDER — The Boulder Valley Church of Christ, just east of Boulder, puts a special emphasis on meeting the needs of the poor and disadvantaged.
The church works with Boulder County Cares, a street outreach program of the Boulder Shelter for the Homeless.
Members go out on bitterly cold nights to provide blankets, gloves, hats, warm clothing and food for people who live on the streets and sleep in parks and under bridges.
This past year, the church’s “Sock-It-To-Me Sunday” effort collected more than 2,000 pairs of socks for Boulder’s homeless population, member Henry Lansford reported.
INDIANA

FRANKLIN — For two years, the Helping Hands Ministry of the Franklin Church of Christ has offered free meals on Tuesdays. The congregation is one of five area churches that provide meals one day each week.
“We’re trying to make sure nobody goes hungry in Johnson County,” ministry leader Patty Rash told Fox 59 News.
James Fisher and his wife have attended the free dinner for months.
“My wife has medical conditions,” Fisher told the news station. “With the high medical costs and insurance and everything hitting at one time, it makes it really tough.”
When the program first started, it served about 20 people. Now, that number stands at 120, Rash said.
OKLAHOMA
LAWTON — The U.S. Army has reinstated a Church of Christ service at Fort Sill.
For 35 years, the Northwest Church of Christ had conducted the weekly service. But just before Christmas, the Army post’s chaplain suspended the assemblies, “taking away the religious freedom of our soldiers,” said Northwest member Don Cherry, who has led the ministry for 10 years.
However, the Army allowed the services to resume in mid-June.
Cherry thanked fellow Christians for their prayers: “In the end, God triumphed, as he always will. But we, as his disciples, must strive to do his work.”
Johnny Sandmann, military and veterans affairs caseworker for U.S. Rep. Tom Cole, R-Oklahoma, contacted the Army on the church’s behalf.
The Liberty Legal Institute, which handles religious liberty cases, also expressed an interest in the case.
TENNESSEE
SPRING HILL — “Shepherd Meals” are helping Spring Meadows Church of Christ members maintain fellowship during the busy summer months.
The elders are taking turns hosting the weekly Sunday meals at the church building. “It’s a good way to help keep us connected through the summer with so many traveling,” preacher Dale Jenkins said.
TEXAS
FLOYDADA — For the first time in more than 40 years, the City Park Church of Christ has elders.
Danny Nutt and Ron Graves have been appointed to serve as shepherds for the 50-member congregation.
The church spent four years preparing for “this biblical style of leadership,” minister Levi Sisemore said.
“God has blessed us with two faithful men who love Jesus and his people,” Sisemore said. “They are very dedicated to the idea of shepherding the flock rather than governing the policies of the church.”
WEST VIRGINIA
PARKERSBURG — About 450 volunteers from Churches of Christ in at least nine states painted houses for the elderly, disabled and poor during the recent Mid-Ohio Valley Work Camp.
The volunteers, mostly teens, came from churches in Florida, Ohio, Pennsylvania, Tennessee, Maryland, Michigan, North Carolina, Virginia and West Virginia, the Parkersburg News and Sentinel reported. They stayed at Ohio Valley University.
However, the work was not limited to teens. A dozen volunteers from the Grand Central Church of Christ in Vienna, W.Va., ranged in age from 70 to 92.