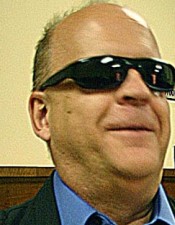 A man of vision

Erik Tryggestad
BLIND FROM BIRTH, minister Glynn Langston wants to make Bibles — and baptism — available to the vision-impaired around the globe.

“Rabbi, I want to see.”
Glynn Langston’s fingers glide over Blind Bartimaeus’ petition to Jesus, recounted in tiny, raised dots on the pages of his Braille Bible.
Actually, “this is only the book of Mark,” he says, his voice tinged with a faint Irish brogue. “The entire Braille Bible takes 37 volumes — and this is one of the smaller ones.”
Langston works with nonprofits and ministries to procure free Scriptures for the sight-impaired. His Louisiana-based ministry, Insight International, sends Bibles in Braille and large print around the world — in 40 languages.
The ministry’s goal is to get the word of God into the hands of those who otherwise couldn’t read it, he says. “But the cream on the cake … is when people obey the gospel and become Christians.”
Blind since birth, Langston, 59, travels the world, speaking to church groups about his ministry — and dispelling the sighted world’s stereotypes with his signature wit.
“I’ve met people that were just terrified of me,” he says. “They were afraid they would say the wrong thing. They were afraid they would use the word ‘see.’ I use it all the time.

“It doesn’t sound very good to ask an audience, ‘Have you heard Betty lately?’ or ‘Have you felt Betty lately?’ You can get yourself in trouble with that!” he says with a laugh.
Everywhere he goes, he encourages church members to reach out to the sight-impaired — a growing demographic, underrepresented in church pews.
“Basically, they’re people that need the Lord — people that Jesus died for,” he says.
HEAD OF THE CLASS
Langston was born in a Houston hospital in February 1949 — two months ahead of his due date. His twin brother died during the delivery. Glynn, who weighed only 2 pounds, survived, but lost his vision.
Fourteen years later, he became the first blind student in his school district to enroll in classes for the sighted.
He carried a reel-to-reel tape recorder and a briefcase full of bulky Braille textbooks, but the load didn’t slow him. In high school, he made the National Honor Society, participated in the history and French clubs and, in his spare time, went ice skating.
He double-majored in modern political history and communications at Southwestern University in Georgetown, Texas. There he met his wife, Ann — on a blind date, appropriately enough.
Langston began graduate work in Soviet studies but soon decided that he could do more to change lives as a minister than a diplomat. In 1972 he and his wife moved to Namur, Belgium, to work with World Radio Gospel Broadcasts. Two years later, they relocated to Ireland to work with Christians and establish churches.
Their son, Andre, and daughter, Elise, were born in the Irish city of Cork.
“Glynn and Ann were a great encouragement to my wife, Doreen, and I when we were young in the ministry,” said Bert Ritchie, now a minister in Coleraine, Northern Ireland. “I recall he used to get a kick out of throwing grapes on the fire and hearing them squeal.”
After 22 years in Europe, the Langstons returned to the United States to launch a ministry for the vision-impaired around the globe. In recognition of their sacrifice, the Southwest Central church in Houston presented them with a plaque — in print and Braille.
TECHNOLOGY AND CHALLENGES
Langston stays up-to-date on gadgets designed to help the sight-impaired. He uses a computer screen reader to search the Internet and send e-mail.
In recent months, Insight International has mailed small, electronic Bibles to locations in the United States, Canada, Australia, New Zealand and Sweden, Langston said. The tiny devices read Scripture in an electronic voice and have easy-to-navigate controls.
At $75 for a case of two, they’re more affordable than paperback Braille Bibles, which retail for about $700. And, “for the first time, a blind person can bring the entire Bible to church,” Langston said.
Langston also works with vision-impaired people in developing nations, supporting Bible camps for the blind in India. Indian evangelists have baptized about 275 through the efforts.
Though he’s thankful for the successes, “I feel like a mouse chipping away at a mountain,” Langston said.
At least 135 million people worldwide are visually impaired, according to the World Health Organization. Blindness is on the rise in the United States, due to complications from diabetes and macular degeneration.
“I’m thankful that the Lord only asks me to do — asks all of us to do — what we can do,” he said.
Through his ministry, Langston has shown church members around the world that blindness is not a hindrance to evangelism, said Tony Coffey, a longtime friend and minister in Dublin, Ireland.
“He has used the gifts God has given him in the kingdom,” Coffey said. “I’ve often said that Glynn has better vision than many who have 20/20 vision.”
FOR MORE INFORMATION on Insight International, see www.insightbow.org, e-mail [email protected] or call (337) 896-1351.