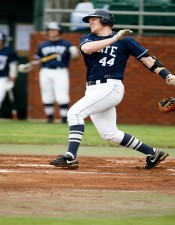 FROM STAFF REPORTS
JOHNSON CITY, Tenn. — A mathematics major with an overall 3.93 grade-point average, Hoilman has been named Atlantic Sun Conference Male Scholar-Athlete of the Year.
The Buccaneer first baseman also earned Louisville Slugger First Team All-American honors. He was one of 30 semifinalists for the USA Baseball Golden Spikes Award, given to the nation’s top amateur player.
Hoilman is a member of the Central Church of Christ in Johnson City. His parents, Danny and Luanne, and his grandmother Grace also are Central members.
Accolades keep pouring in for East Tennessee State University baseball player Paul Hoilman after a remarkable 2010 season.
“He’s just a fine Christian young man who has grown up in the congregation here,” church secretary Kathy Torgersen said. “The church is real proud of Paul.”
Hoilman finished the season ranked in the top 25 nationally in hits (99), runs (79), doubles (24), home runs (24), RBIs (84), walks (51) and on-base percentage (.526). He led the nation in total bases (202) and slugging percentage (.860).