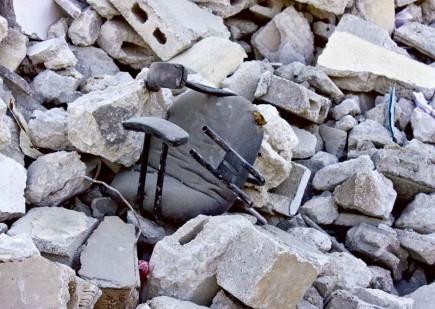 Bobby Ross Jr.
Sometimes, a quote says it all. From heartwrenching natural disasters to inspirational faith journeys, The Christian Chronicle captured the news in Christians’ own words during 2010. Here are the Chronicle staff’s favorite and most memorable quotes of the year:
“This place is broken.”

“If the New Orleans Saints can win the Super Bowl, then the church in New Orleans can grow.”

“I’m sorry, but men just really don’t know what it’s like to be a girl, especially not a teenage girl.”


PHIL SANDERS, a speaker for the “In Search of the Lord’s Way” television ministry, during an areawide
campaign and gospel meeting in Parkersburg, W.Va.
•

“I usually preach from a script. It would be nice if I could get a teleprompter like I have at the TV station.”

“These are kids that need that second chance. And I am the king of second chances. All of us are — Jesus died for all of our sins.”


JIM MORRIS, “The Rookie” and member of the Kerrville Church of Christ in Texas, on his work with Arms of Hope’s children’s home in Medina, Texas.
•

“Kaden was the sunshine of everybody’s life.”


BILLY BLAKENEY,  minister of the Foreman Church of Christ in Arkansas, on a 3-year-old boy killed along with his mother, Leslie Jez, 23, by a flash flood.
•

“You look for that extra grandma at church or those extra aunts and uncles that are going to help you raise your kids when your husband is gone and you need somebody else to give you a break.”


CINDY COLEMAN, wife of an Army soldier and member of the Lakeview Church of Christ in Tacoma, Wash., on the support her family receives when her husband deploys overseas.
•


“He’s the real deal. He’s one of those guys that I would always take our players to and say, ‘This is the way that you behave.’”

“If I’m busy, I don’t have a whole lot of time for foolishness.”


GARY SMITH, pulpit minister of the Fifth Ward Church of Christ in Houston, on Christians focusing on the Lord’s work.
•

“I learned about Jesus, God and the Bible. Praise be to the Lord.”


RURU, a Taiwanese student in Arkansas, on her experience with the “FriendSpeak” ministry.
•

“We used to spend a lot of time talking about bricks and mortar, paint and parking lots, but we decided to spend the majority of our time dealing with people, not things.”


CRAIG LONEY, elder of the Park Plaza Church of Christ in Tulsa, Okla., on the congregation’s growth.
•

“All of y’all are going to be wearing white one day, too. We just got a jumpstart.”


RODNEY, member of an inmate Church of Christ, referring to his white prison garb stamped with
“Alabama Dept. of Corrections” in bold black letters.
•

“You never know how your life’s going to end up or where God’s going to put you.”


NORMAN CHEE ATCHISON, a Navajo Indian and housefather at Manuelito Navajo Children’s Home in
Gallup, N.M., on the tumultuous journey that brought him back to the home where he was raised.
•


“It was just a magical evening.”


LUCRETIA McMICKEN, housemother at Christ’s Haven for Children in Keller, Texas, on the experience of three girls recognized before a Texas Rangers’ game.
•


“In Africa, the pew and the pulpit live in two different worlds — and we are all to blame.”


RONALD WASILWA, minister of the Kitale Church of Christ in Kenya, on the financial discrepancies between some U.S.-supported ministers and African church members.
•

“They have never let us walk alone. It is as though they’ve always known us.”


ABURIME EHIMARE, Nigerian church member, on the support his family received from the Northlake
Church of Christ in Tucker, Ga., after his wife delivered quadruplets at a nearby hospital.
•

“I don’t know if it was a personal favor to me, but it really has helped.”


LESTER HOLT, weekend co-anchor of NBC’s “Today” show, on the Manhattan Church of Christ moving the Sunday start time to 9:30 a.m., 30 minutes later than before.
•

“I would rather teach Romans than eat when I’m hungry, and I love to eat.”

“This is more groceries than I’ve ever had in my cart in all my 58 years. It’s like a miracle from God.”


CARI THORNTON, member of the North Atlanta Church of Christ, quoting a woman named Carolyn who
benefited from an anonymous $1.5 million gift used by church members to do good works in the Lord’s name.
•

“I hope we’re planting a mustard seed here, and that by bringing in people literally from all over the United States and from around the world, we will create a rich new understanding of a cappella music.”


DARRYL TIPPENS, co-convener of “The Ascending Voice II,” an international symposium of sacred a cappella music at Pepperdine University in Malibu, Calif.
•


“The violence is escalating and spreading. There is no way to exaggerate how bad things have gotten … and I have no idea how or when it will end.”

“I do believe that when God closes one door, he’ll open another one for me. So I’m hoping there’s a job out there where I can still teach Bible to students and incorporate that into my classroom.”


JANICE DOUGLASS, longtime teacher at Aletheia Christian School in Newark, Del., on her outlook
as the financially troubled school closed.
•


“The Harpeth River flows through here in a serpentine fashion. Well, the snake bit us.”


STEVE BLACKMAN, pulpit minister of the Bellevue Church of Christ in Nashville, Tenn., on devastating
flooding that struck the Nashville area.