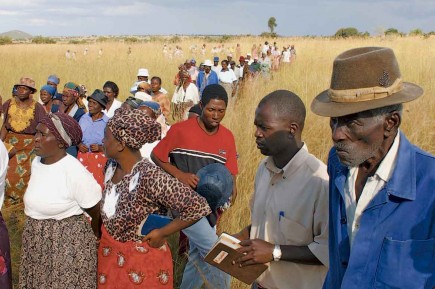 Zimbabwe: Finding joy in a time of sorrow

Erik Tryggestad
MACHEKE, ZIMBABWE — A line of mourners weaved through shoulder-high grass to the gravesite.
One by one they sprinkled handfuls of dirt over the coffin, saying goodbye to a 12-year-old boy who died as a result of HIV.
I didn’t expect to find joy in a place like this. But joy I found — in the faces that welcomed us like visiting dignitaries to their small, well-kept huts with thatched roofs. We squeezed into one, where a group of women kept vigil over a small casket draped with a multi-colored, striped blanket.
We sang four-part harmonies as the women quietly wept. I struggled to keep up with the words, written in a language called Shona, in a well-worn hymnal.
I had traveled to Zimbabwe with four members of the East Point Church of Christ in Wichita, Kan. They sponsor the Nhowe Mission hospital and make annual visits.
While the other Americans talked about the heady matters of hospital maintenance, East Point’s outreach minister, John Langley, and I slipped out with Timothy Matangira, a hospital chaplain and rural evangelist.
After we sang, brother Timothy whisked us into a sitting room, where the family had prepared a stew of chicken, greens and sadza — a doughy substance made from corn that tastes a bit like mashed potatoes.
I feared for my stomach, but realized it likely was more than many Zimbabweans eat in a week. Chickens are killed only for honored guests, I was later told.
They gave it gladly, and even cheered when I turned down a fork and opted to eat with my hands like everybody else. (I quickly learned to let my sadza cool before sticking my fingers into it.) Oliver, the family patriarch, seemed fascinated by me. He wanted to know more about my job, where I’ve been, what I’ve seen. After our conversation, he said, “I want to hear you speak.”
I didn’t realize he meant for me to speak publicly, 10 minutes later. I praised God for the tiny New Testament I had stuffed in my camera bag just days before. I thumbed through it anxiously, looking for Romans 8.
John spoke first. Timothy translated his words into Shona. Then it was my turn. Hands trembling, I told the mourners that I wasn’t familiar with their funeral customs, but the love and concern they showed for the grieving family needed no translation. I read the verse that tells about present suffering and future glory.
A young preacher, Nhamo Marunga, closed the service with a passionate sermon from Matthew 18. We must become like children — like Andrew — to enter the kingdom of heaven, he said.
It was the first time I heard the child’s name. He was a patient at the hospital. “Thank God for Nhowe Mission,” one of the boy’s relatives said, drawing enthusiastic hoots from the mourners.
But the somber trek to the burial site heightened the sense of loss. A lone woman’s sobs — she had cared for the boy as he died — broke the silence as a sea of people huddled around the small coffin.
In a land of economic depression and political uncertainty, in a moment of profound loss, the Zimbabweans cheerfully gave what they had. They fed us much more than a meal that day. Now that I’ve returned to my land of plenty, I think about that humble stew and sadza, served by starving, smiling people.